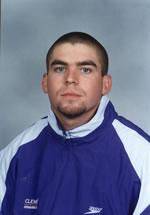 Clemson diver Eric Shulick has been selected to represent the University at the 2004 NCAA Leadership Conference to be held May 30th – June 3rd at Disney’s Wide World of Sports Complex and Coronado Springs Resort in Lake Buena Vista, FL. Shulick, who was nominated by the Vickery Hall staff, is one of 324 student-athletes who have been tabbed as current or future leaders on their college campuses.

Shulick is coming off a strong junior season in which he was named All-ACC. The Naugatuck, CT, native set a new school record in the one-meter diving competition by scoring 323.03 points against NC State. Football’s Chansi Stuckey will serve as Shulick’s alternate for the conference

The 2004 NCAA Leadership Conference is one of the largest non-competitive gatherings of NCAA student-athletes. The conference is designed to enhance student-athletes’ leadership and communication skills and to enable them to become more effective leaders and motivators when they return to their campuses. The convention setting provides the student-athletes with an opportunity to create dialogue surrounding topics that affect them on campus and in their communities. The conference also provides them with exercises to enhance their decision-making and problem-solving skills, and improve planning and priority management.

During the five-day event, student-athletes have the opportunity to discuss a variety of topics dealing with critical needs of student-athletes. A total of 52 coaches, athletics administrators and program facilitators will join the student-athletes at the conference. In addition, 24 members representing the national Student-Athlete Advisory Committee (SAAC) also will participate in the discussion sessions and group activities. SAAC provides feedback to NCAA committees and councils regarding student welfare issues and is considered the “voice” of the student-athlete within the NCAA governance structure.

Following the leadership conference, the student-athletes will be asked to share their experiences and topic discussions with their campus SAAC, as well as other campus leaders. The participants are also asked to develop a self-directed project that will address an issue on their campus or in their community, and implement the plan when they return to their campuses.

Criteria for selection include the student-athletes’ demonstrated ability and strong desire to be a leader and the student-athletes’ potential to benefit significantly from a leadership development experience. In order to be eligible for the conference, the student-athletes must be in good academic standing, and must have athletics eligibility remaining in the following academic year. A committee comprised of CHAMPS/Life Skills coordinators from member institutions and NCAA student-athletes review the nominations to determine the final selections.