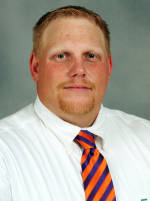 CLEMSON, SC – Shawn Cobey has been named the final addition to Clemson’s track & field coaching staff for the 2009-10 season. Director of Track & Field Lawrence Johnson made the announcement Tuesday. Cobey joins the Tiger track & field program after a successful stint as a student-athlete and coach at his alma mater, Youngstown State. Cobey will be in charge of the men’s and women’s throwers.

“We’re very delighted to have Shawn join our coaching staff,” Johnson said. “He’s young, knowledgeable and anxious to compete in the ACC and on a national level. His background in the throwing areas should allow us to become one of the best groups in the country.”

In 2009, Cobey instructed a pair of NCAA Mideast Regional qualifiers in Joe Lahmon and Aaron Merrill. Both those student-athletes also won a pair of Horizon League crowns this past season. Merrill was also a USTFCCCA Scholar Athlete and third-team CoSIDA Academic All-American. Also in 2009, Danielle Curry won three Horizon titles (including a sweep of the indoor and outdoor shot put) in the women’s throwing events.

The most decorated thrower in Youngstown State history was coached personally by Cobey. Bethany Anderson was a 12-time Horizon League champion from 2005-08. She also was named Most Outstanding Field Performer at three different Horizon League meets during her time with the Penguin program.

He also coached Jarrod Davis to an outstanding career. Under Cobey’s tutelage, Davis was a two-time Most Outstanding Field Performer and three-time qualifier for the NCAA Mideast Regional. Davis was also an NCAA provisional qualifier in the indoor weight throw as a senior in 2006. Davis won three Horizon League championships in 2006.

Prior to his time as an assistant coach at Youngstown State, Cobey was head coach of his alma mater, Canfield High School, for two years. Canfield won two conference championships under Cobey’s watch.

Cobey was a six-time all-conference thrower at Youngstown State, which included a pair of conference championships. He ranks among the school’s top 10 performers in the indoor and outdoor shot put, weight throw, discus and hammer throw. He earned a bachelor’s degree in education in 2001. While coaching at his alma mater, Cobey also taught physical education and health for Youngstown City Schools.