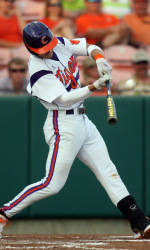 Clemson scored the final seven runs, capped by Doug Kingsmore Stadium on Tuesday afternoon. The Tigers improved to 29-20, while the Golden Eagles dropped to 19-28.

The Golden Eagles scored five two-out runs in the top of the first inning, capped by Zephan Guyear’s grand slam. The Tigers responded with two runs in the bottom of the first inning, but Tennessee Tech answered back with two runs in the third inning and one run in the top of the fourth inning to build an 8-2 lead. However, David Haselden entered the game in the fifth inning with no outs and two runners on base and held the Golden Eagles scoreless during the remainder of the game.

Meanwhile, the Tigers chipped away with one run in the bottom of the fourth inning and another run in the sixth inning. In the seventh inning, Clemson scored four two-out runs to even the score, highlighted by pinch-hitter Joe Costigan’s two-run single and two runs that scored on a single wild pitch.

Then in the 10th inning, Shaffer crushed the first pitch over the fence in left field for a walkoff homer. It was the first walkoff homer by a Tiger since April 21, 2009, when Jeff Schaus hit a walkoff grand slam to give Clemson a 5-3 victory over Coastal Carolina. It was also Shaffer’s first career walkoff hit.

Haselden (3-1) earned the win by pitching the final 6.0 innings without allowing a run. He gave up five hits and no walks with four strikeouts.

Jacob McWhirter (0-4) suffered the loss, as he gave up Shaffer’s home run on his only pitch of the game.

The Golden Eagles scored five runs with two outs in the top of the first inning. James Abraham blooped an 0-2 pitch to right field for a one-out single. Two batters later with two outs, Zach Stephens was hit-by-pitch, then Ben Burgess grounded an 0-2 pitch through the right side for a single to load the bases. Dylan Bosheers followed with another single through the right side to score Abraham, then Guyear belted a grand slam to left-center, his fourth long ball of the season.

Burgess led off the third inning with a single through the left side and Bosheers was hit-by-pitch. Both runners moved up a base on Guyear’s sacrifice bunt, then Tevis Sherfield reached on an error by Wilkerson at second as Burgess scored. After Sherfield stole second, Chad Hayes lined a single to right field to score Bosheers.

Stephens led off the top of the fourth inning with a long home run to left field, his 17th long ball of the year.

In the bottom of the fourth inning, Tyler Slaton drew a one-out walk, then Jason Stolz flared a single to center. Both runners moved up a base on the play on a fielding error by centerfielder Austin Wulf. Wilkerson followed with a groundout to first that plated Slaton.

The Tigers cut further into Tennessee Tech’s lead in the sixth inning. Slaton led off with a walk. Two batters later, Wilkerson ripped a one-out single through the right side. Thomas Brittle followed with a single up the middle to score Slaton.

The Tigers scored four runs on three hits to tie the score in the seventh inning. Jay Baum led off with a hit-by-pitch, then McGibbon blooped a 1-2 pitch down the left-field line for a single. Baum moved to third on the single and McGibbon advanced to second on the throw to third. After the next two Tigers struck out, Costigan came off the bench with a two-out single to right-center to score Baum and McGibbon. Wilkerson followed with a single through the right side to move Costigan to third, then Wilkerson stole second. After Brittle walked to load the bases, Costigan and Wilkerson both scored on Cullen Park’s wild pitch to even the score.

After McWhirter entered the game in the 10th inning with one out and no runners on base, Shaffer desposited his first pitch deep over the fence in left field for a walkoff homer, his ninth long ball of the season.

Shaffer led Clemson’s 14-hit attack by going 3-for-6 with a homer, two RBIs, and two runs. Wilkerson totaled three hits, two runs, and a walk, while McGibbon and Costigan added two hits apiece. Brittle went 1-for-5 with an RBI to extend his hitting streak to 22 games, tied for the eighth-longest hitting streak in school history.

Every Tennessee Tech starter had at least one hit. Guyear went 4-for-5 with a grand slam, while Burgess went 4-for-6 with two runs for the Golden Eagles, who amassed 17 hits.

Clemson will take three days off before returning to action to face #1 Florida State in a three-game series at Doug Kingsmore Stadium starting Saturday at 6:30 PM. The game will be available live via webcast at ESPN3.