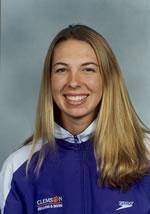 Shafer and Humes Lead Clemson On Friday At 2004 ACC Championships

CHARLOTTESVILLE, VA – The Clemson women’s swimming and diving team is in seventh place through three days of competition at the 2004 ACC Women’s Swimming & Diving Championships. On Friday, Ashley Shafer and Courtney Humes posted sixth and seventh-place finishes in the finals of the 100 breast and the 100 fly, respectively, to lead the Tigers.

Virginia is in first place heading into the final day of the meet with 427 points. Florida State is currently in second place (410) and North Carolina is third (401). Maryland and Duke are fourth and fifth with 360 and 200 points, respectively. Georgia Tech holds sixth place with 184 points, while the Tigers trail the Yellow Jackets by three points (181) for seventh place. NC State is in eighth place with 154 points through three days of competition.

Shafer led the Tigers on Friday, finishing sixth in the championship final of the 100 breast with a time of 1:03.99. Caitlin Bissell finished ninth and Sarah Cefalu was 18th in the consolation finals with times of 1:04.32 and 1:06.61, respectively.

Humes took seventh place in the championship final of the 100 fly, posting a time of 55.68 in the event. Humes recorded a career-fastest time of 54.98 in the preliminary round of the event to advance to Friday night’s final. In the consolation finals of the event, Janell Brodrick placed 19th (57.39) while Kelly Urso and Caroline Boden finished 21st and 22nd with times of 57.77 and 57.84, respectively.