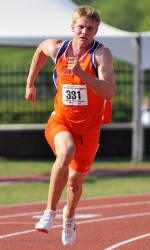 CLEMSON, SC – Clemson athletes past and present had several outstanding performances and solid finishes over the course of the past few days at the USA JR/SR Track & Field Championships at Drake Stadium in Des Moines, IA.

Stormy Kendrick claimed a spot in the field for the IAAF World Junior Championships by finishing runner-up in the 200m dash on Friday. She posted a time of 23.60 in the final and is one of two U.S. sprinters headed to Canada to compete in the 200m dash from July 19-25 for the 13th annual World Juniors. Kendrick will also be in the 4x100m relay pool.

Miller Moss finished fourth in the decathlon in his first trip to the USA Championships. The red-shirt junior and school record-holder for the 10-event slate, Moss posted a total of 7,614 points. The big event for Moss on the first day was the high jump, where he cleared a personal best height of 6’6.25″. However, he struggled again on day two in the discus throw and recorded a mark of only 116’10”. He rebounded with a personal best in the javelin (169’7″) and a solid time of 4:39.66 to conclude the decathlon in the 1500m run.

Michaylin Golladay advanced to the semifinals in the senior 100 hurdles, and was just one spot shy of qualifying for the final. She posted a time of 13.41 in the semifinals, despite a significant headwind and the fact that she ran against multiple professional sprinters.

April Sinkler was seventh in the long jump competition. She came out with a big jump in her first attempt, hitting a season-best outdoor mark of 21’4.25″. She advanced to the finals, but did not improve on her mark and settled for the solid seventh-place effort.

Sinkler and Golladay will next compete July 9-11 in Miramar, FL with the United States U23 team at the NACAC (North American, Central American, Caribbean) Championships.

It was a tough ending to the meet for former Clemson standout Travis Padgett, now a professional sprinter for adidas. The Shelby, NC native and former NCAA Champion in the 60m dash was guilty of a false start in the 100m final, after the first false start had already been charged to the field. Therefore, he was disqualified after running the top time in the preliminary round.

Another former Tigers, George Kitchens, competed in the men’s long jump. He got off to a good start with a leap of 25’0.75″ on his first attempt, but fouls on his next two jumps prevented him from qualifying for the finals. Kitchens, last year’s runner-up in the event, came home with an 11th-place finish.