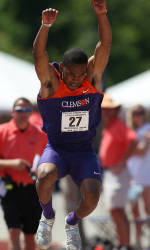 CLEMSON, SC – Clemson has sent a group of seven student-athletes to the USA Junior Track & Field Championships, held Friday through Sunday this week in Bloomington, IN. T.J. Christy and James Dwyer. The championships consist of high school and college athletes who will not turn 20 years of age in 2012.

Bryant will compete in two events, the 100 dash and 200 dash. She is slated for the 100 prelims Friday at 3:15 PM, wit the final set for 6:40. The 200 prelims are scheduled for 6:40 PM on Saturday, with the final held Sunday at 3:55. Bryant was the ACC champion in both events this spring, and a second-team All-American in the 200 dash. A native of Milwaukee, WI, she competed at the USA Juniors in 2010 and was third in the 200 and fifth in the 100 as a high school junior. She went on to run on Team USA’s gold medal winning 4×100 relay alongside current teammate Stormy Kendrick at the IAAF World Junior Championships.

Carpenter will be one of the favorites in the men’s triple jump. A native of Mauldin, SC, he established a Clemson freshman record this season with a mark of 51’8.25″/15.75m. Carpenter, who finished fourth in the event at the ACC Outdoor Championships, will compete Saturday at 6:10 PM.

Christy is also entered in two events, the shot put and discus. He will compete in the shot at 3:00 PM on Saturday. The discus is scheduled for 2:30 on Sunday.

The two highest placing finishers in each event will be given first priority for Team USA at the 2012 IAAF World Junior Championships, which will be held July 10-15 in Barcelona, Spain.