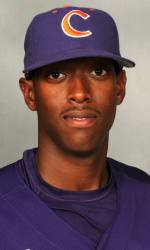 Behind a seven-run second inning and a handful of highlight-reel defensive plays, Boston College defeated #10 Clemson 11-5 in front of 5,587 fans at Doug Kingsmore Stadium on Saturday night. The Eagles, who evened the series 1-1, improved to 12-14 overall and 4-7 in the ACC. The Tigers fell to 19-8 overall and 8-3 in ACC play. It was also Clemson’s first home loss in league play in eight games.

Clemson grabbed a 4-0 lead in the first inning, but the Eagles responded with seven runs in the second inning to take the lead for good. With Boston College ahead 7-5 and the Tiger leadoff batter on first base in both the fourth and sixth innings, third-baseman Anthony Melchionda and first-baseman Mickey Wiswall (respectively) made outstanding defensive plays on would-be doubles with no outs. In fact, the Tigers had the leadoff batter on base in four of the last six innings, but they failed to score after the second inning.

Eagle starter Pat Dean (5-0) was the benefactor of Boston College’s stellar defensive effort, as the lefthander shut down Clemson after the second inning. In 8.0 innings pitched (99 pitches), he allowed eight hits, five runs, and two walks with three strikeouts to earn the win.

Tiger starter Will Lamb (3-1) suffered the loss, as he gave up six runs on four hits and three walks in 1.1 innings pitched. Alex Frederick pitched a career-high 5.2 innings in relief and struck out a career-best seven batters.

The Tigers took the game’s first lead in the first inning. Chris Epps led off with a flyball double to shallow left-center and scored on Mike Freeman’s double down the left-field line. Jeff Schaus reached on a fielder’s choice as Freeman was retired at third base. After Wilson Boyd’s infield single, Brad Miller belted a double to left-center to score Schaus. John Hinson followed with a single through the right side to plate Boyd and Miller.

The Eagles came right back and scored seven runs in the top of the second inning to take the lead. Matt Watson led off with a walk on four pitches, moved to second on a wild pitch, and scored on Philip Miclat’s single to right field. After Brad Zapenas walked, Garret Smith singled down the right-field line to plate Miclat. Robbie Anston then lined a double to left-center to score Zapenas and Matt Hamlet singled up the middle to score Smith and Anston. After a pitching change, Wiswall blasted a two-run homer to center, his seventh long ball of the season.

In the bottom of the second inning, Epps drew a one-out walk, advanced to second on Freeman’s groundout, and scored on Schaus’ two-out single up the middle.

The Eagles doubled their lead in the seventh inning when Watson hit a two-run homer to right field, his fourth long ball of the season. John Spatola, who reached on an infield single, also scored on the home run.

Boston College added two insurance runs in the ninth inning. Wiswall and Spatola led off with singles through the right side. Two batters later, Mike Sudol doubled to left-center to score Wiswall. Spatola then scored on a wild pitch.

All 10 Boston College batters had at least one hit, as the Eagles totaled 14 hits in the game. Wiswall went 2-for-4 with a homer, two RBIs, and two runs, while Anston, Spatola, and Smith all added two hits apiece.

Epps, Schaus, and Miller all had two hits apiece to lead Clemson, who had 10 hits in the game. The game did not feature an error as well.

The Tigers and Eagles will play the series-finale on Sunday at 12:05 PM. Due to Boston College’s travel plans, no inning on Sunday can start after 4:10 PM.