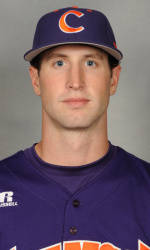 Luke Gragg led off with a pinch-hit single, scored a run, and later hit a two-run single, all in Western Carolina’s seven-run fourth inning, as the Catamounts downed Clemson 8-4 in front of 1,627 fans at Hennon Stadium on Wednesday. The Catamounts, who won their 12th home game in a row dating to 2011, improved to 13-4. The Tigers dropped to 6-8 in 2012.

With Western Carolina trailing 4-1, Head Coach Bobby Moranda called upon Gragg to provide a spark for the Catamounts, and he did just that. He led off the fourth inning with a single and started their seven-run inning on six hits. Later in the frame, Gragg laced a two-out single to score two runs and close out the game’s scoring.

David Haselden (1-1) suffered the loss, as he gave up four runs on four hits in 0.1 innings pitched in relief of freshman righthander Daniel Gossett, who was making his first career start.

The Catamounts struck first in the first inning. Aaron Attaway lined the first pitch to right field for a leadoff single, then Tyler White flared a 1-2 pitch down the right-field line for a single to move Attaway to third. Ross Heffley lined into a double play, but Jacob Hoyle laced a two-out single to center to score Attaway.

The Tigers came right back and tied the score in the second inning. Phil Pohl led off with a bloop single to left-center on an 0-2 pitch, then Spencer Kieboom hit a potential double-play grounder to Attaway. But the ball took a high hop and got by the shortstop to allow Pohl to advance to third and Kieboom to move to second on the error. Jon McGibbon grounded out to second to score Pohl and advance Kieboom to third, but the next two Tigers were unable to plate the go-ahead run.

In the third inning, Thomas Brittle led off with a bunt single and advanced to second on the play on a throwing error. Steve Wilkerson followed with a groundball single up the middle and Jason Stolz reached on another bunt single. Shaffer flied out to right field to move Wilkerson to third, then Wilkerson scored when the throw got by White at third. Curtis’ throw home was also errant, allowing Stolz to advance to third on Western Carolina’s third error of the frame and fourth of the game. Pohl then hit a sacrifice fly to left-center to score Stolz.

But the Catamounts scored seven runs in the fourth inning to regain the lead for good. Gragg led off with a single to left-center and Dykota Spiess walked on nine pitches. Adam Martin, who was unsuccessful getting a bunt down, belted a two-strike double to right-center to score Gragg and Spiess. After Martin advanced to third on Attaway’s groundout to short, he scored on a wild pitch to tie the score. White followed with a hit-by-pitch, then Heffley crushed a two-run homer to left field, his second long ball of the year. Hoyle followed with a single to right-center. Two batters later with two outs, Cody Jones reached on an infield single as Hoyle advanced to third base on the play. After Jones advanced to second on a wild pitch, Gragg lined a single through the left side to score Hoyle and Jones.

In the seventh inning, Garrett Boulware hit a two-out single to left-center and Brittle walked. Wilkerson then grounded a single through the left side, but Spiess gunned down Boulware at the plate to end the inning and keep the Catamounts ahead 8-4.

Wilkerson went 3-for-4 with an RBI to pace the Tigers, who accumulated seven hits in the contest.

Clemson will return home to face Boston College in a three-game series at Doug Kingsmore Stadium starting Friday at 6:30 PM.