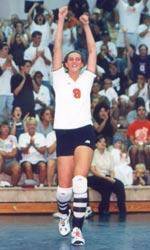 Clemson, SC – Seven former Clemson volleyball players have been named to the 50th Anniversary All-ACC team as announced by the ACC Commissioner John Swofford on Thursday. The Tigers who have been named to the team include Alison Coday, Heather Kahl, Robin Kibben, Julie Rodriguez, Jodi Steffes, Cindy Stern and Michelle Thieke. All seven of the players were AVCA All-District/Region team and All-ACC team members at Clemson, and five of the players earned such honors and awards on more than one occasion. All of the honorees played under current head coach Jolene Jordan Hoover, who is entering her 10th year at Clemson.

Alison Coday was a three-year AVCA All-District team member, as well as a member of the first team All-ACC in 1999, second team All-ACC in 1998, and named to the ACC All-Tournament team in 1998. She is the Tigers’ all-time leader for kills per game with a 4.02 average and was the 1999 recipient of the ACC’s Weaver-James-Corrigan Award. Coday is ranked second on Clemson’s attempts list with 4,165, ranked fourth in all-time kills with 1,678 and ninth in Clemson’s record book for block assists with 231.

Heather Kahl was named to nine all-tournament teams during her career and earned AVCA All-Region honors in 1994. She was also named second team All-ACC and to the All-Tournament team in 1994. Kahl is ranked ninth on Clemson’s all time attempts list, second in all-time assists, fifth in all-time digs, third on Clemson’s all-time assists per game list and fifth on the all-time digs per game list.

Robin Kibben was the first Tiger to be named first team All-ACC three consecutive years (1992-94), and she was named to the 1994 ACC All-Tournament team. She was also a member of the AVCA All-South Region team in 1993 and 1994. Kibben tops the records for hitting percentage (.327) and is Clemson’s all-time kills leader (1,804).

Jodi Steffes was Clemson’s first four-time All-Region honoree. She was also a three-time All-ACC second team member (1999-2001). Steffes was named the 1998 ACC Rookie of the Year and that same year was named to the ACC All-Freshman team. Throughout her career at Clemson, she was named to seven all-tournament teams. Steffes ranks fifth on the all-time list for most attempts (3,600) and kills (1,422), ranks eighth in block assists (288) and ninth in service aces (132).

Cindy Stern was Clemson’s and the ACC’s first volleyball All-American in 1999, as well as their first USPV draftee in 2000. She competed as a member of the USPV Dream-Team after earning ACC Player of the Year honors in 1999. Stern also was named to the first team All-ACC in 1997 and 1999, second team All-ACC in 1998 and was a member of the1996 ACC All-Freshman team. In 1997, Stern played on the USA National Team. She ranks among the top five on four of Clemson’s all-time lists. Those accomplishments include most attempts with 3,965, second all-time in kills with 1,744 and fourth on Clemson’s all-time best list for block solos with 163. She is also the Tigers’ all-time leader in block assists with 448.

Michelle Thieke was named the 1997 ACC Tournament MVP as she helped lead the Tigers to their first-ever ACC Championship. She was named to five all-tournament teams during her career as a Tiger and earned second team All-ACC and AVCA All-District honors in 1995. Thieke is Clemson’s all-time assists leader with 4,305 and is second on the assists per game list with an 11.27 average.