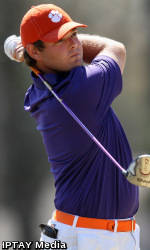 Seven Current or Former Tigers Qualify for US Open Sectionals

CLEMSON, SC – Current Clemson golfers McCuen Elmore and Jacob Burger are two of seven golfers with ties to Clemson who have moved on from local qualifying to sectional qualifying for the 2012 United States Open. A third current Tiger, Corbin Mills, is also qualified for the sectional stage by virtue of his victory at the 2011 United States Public Links Championship.

Elmore shot a 67 to finish third at his qualifier at Summer Grove Club in Newnan, GA last week. He was the only amateur to move on from this site. Clemson teammate Corbin Mills served as his caddy. Both will begin play for Clemson in the NCAA Tournament on Thursday at the regional tournament in Bowling Green, KY.

Burger finished in a tie for third with a 72 at the Colleton River Dye Course. Former Tiger Tanner Ervin had a 73 and is listed as an alternate from this site.

Former Tigers who qualified for the sectionals through outstanding play at the local level include David May, Vince Hatfield, Brian Duncan, Brent Delahoussaye and Sam Saunders.

May had a 69 at the Country Club of Rochester in Rochester, NY to finish in fifth place at that site. Hatfield had a 68 at the River Landing Course in Wallace, NC, the third best score among the competitors.

Saunders, who played on Clemson’s fifth ranked team in 2008, shot a 66 at the Metrowest Golf Course in Orlando, FL, the top score at that site.

The players listed above and other former Tigers on the PGA Tour who are exempt from local qualifying will all play 36 holes at different sites on Monday, June 4 in the final qualifying stage for the US Open, which will be held June 14-17 at the Olympic Club in San Francisco.

Former Clemson All-Americans Jonathan Byrd and Lucas Glover have already qualified for the US Open and do not have to go through qualifying.