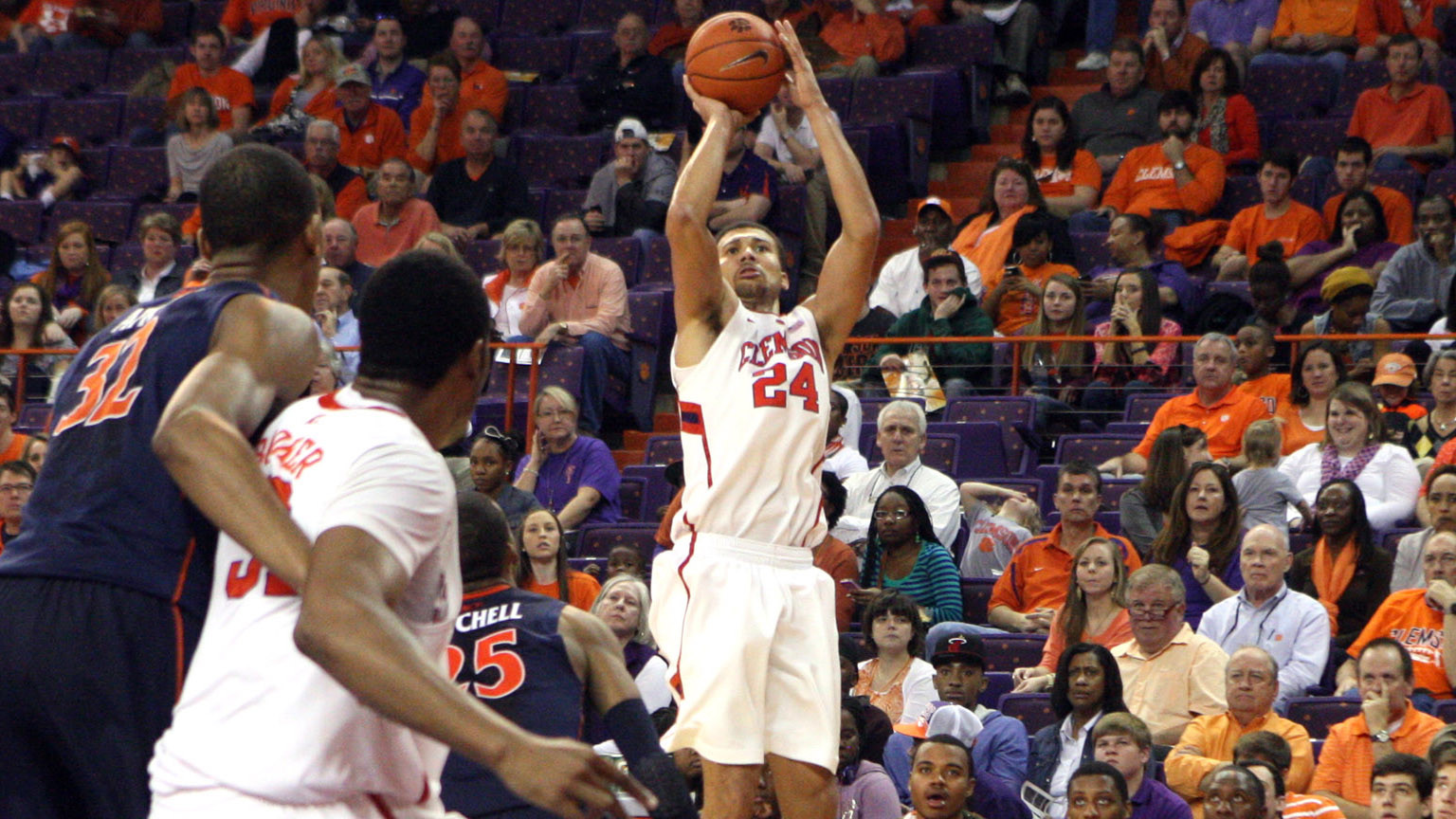 CLEMSON, SC – Clemson seniors Devin Booker and Milton Jennings led the Tigers to their first ACC victory of the 2012-13 season on Saturday, a 59-44 triumph over Virginia in front of 7,795 fans at Littlejohn Coliseum. The Tigers improved to 9-6 on the season, 1-2 in the ACC. The Cavaliers dropped to 11-5 overall, also 1-2 in league play. It was Clemson’s fourth straight win at home over Virginia.Jennings produced a career game for Brad Brownell‘s team. The 6-foot-9 native of Summerville, SC scored a season-best 21 points on 7-of-13 shooting. He made a career high 5-of-8 from three-point distance. It was Jennings’ career high against an ACC team. His previous best was 17 in a win over NC State last season. He added a season-high 11 rebounds for his first double-double of the 2012-13 campaign. Booker was just 3-for-10 from the field, but sank 9-of-12 at the charity stripe to finish with 15 points. He added nine rebounds for Clemson, who won the battle of the boards by a +6 margin.The Tigers shot 76.9 percent in the second half, their high figure for the 2012-13 season. Clemson ended the game shooting 17-for-33, 51.5 percent. It was the fewest field goal attempts for Clemson in 80 games under Brownell. His team made 19-of-27 at the free throw line, an advantage of 14 points as UVA made 5-of-8.It did not take long for the Tigers to surpass their first half field goal total from Tuesday’s game at Duke. Clemson made just 3-for-25 in that half against the Blue Devils, but made its fourth shot at the 13:45 mark when Jennings banked in a three from the wing. Clemson stretched its advantage to four, but it was trimmed to one at 19-18 when Akil Mitchell scored on a layup with 5:35 remaining. With the game tied at 20, Clemson scored the final two baskets of the opening frame to take a 24-20 lead into the locker room on a Rod Hall jumper and Booker layup.Booker pushed the lead to nine at 33-24 after scoring inside on a feed from Jennings at the 14:55 mark of the second half. But UVA responded with five quick points, the last three courtesy an Evan Nolte trifecta. Clemson answered with its own 5-0 run to make it 38-29 after Damarcus Harrison hit his only two field goals of the game.The lead finally reached double digits at 49-38 after K.J. McDaniels converted a pair of free throws and Booker a three-point play. The lead was never lower than seven points the final six minutes of the game.Joe Harris led Virginia with 14 points, despite 5-of-13 shooting. The Cavs struggled to 35.4 percent from the field, including just 8-of-26 (.308) in the second half. Mitchell had seven points and nine rebounds. Clemson returns to action at Littlejohn Coliseum on Tuesday, Jan. 15 to take on Wake Forest. The game will be televised by ESPNU and tipoff is set for 7:00 PM. Tickets are available at ClemsonTigers.com or by calling 1-800-CLEMSON.