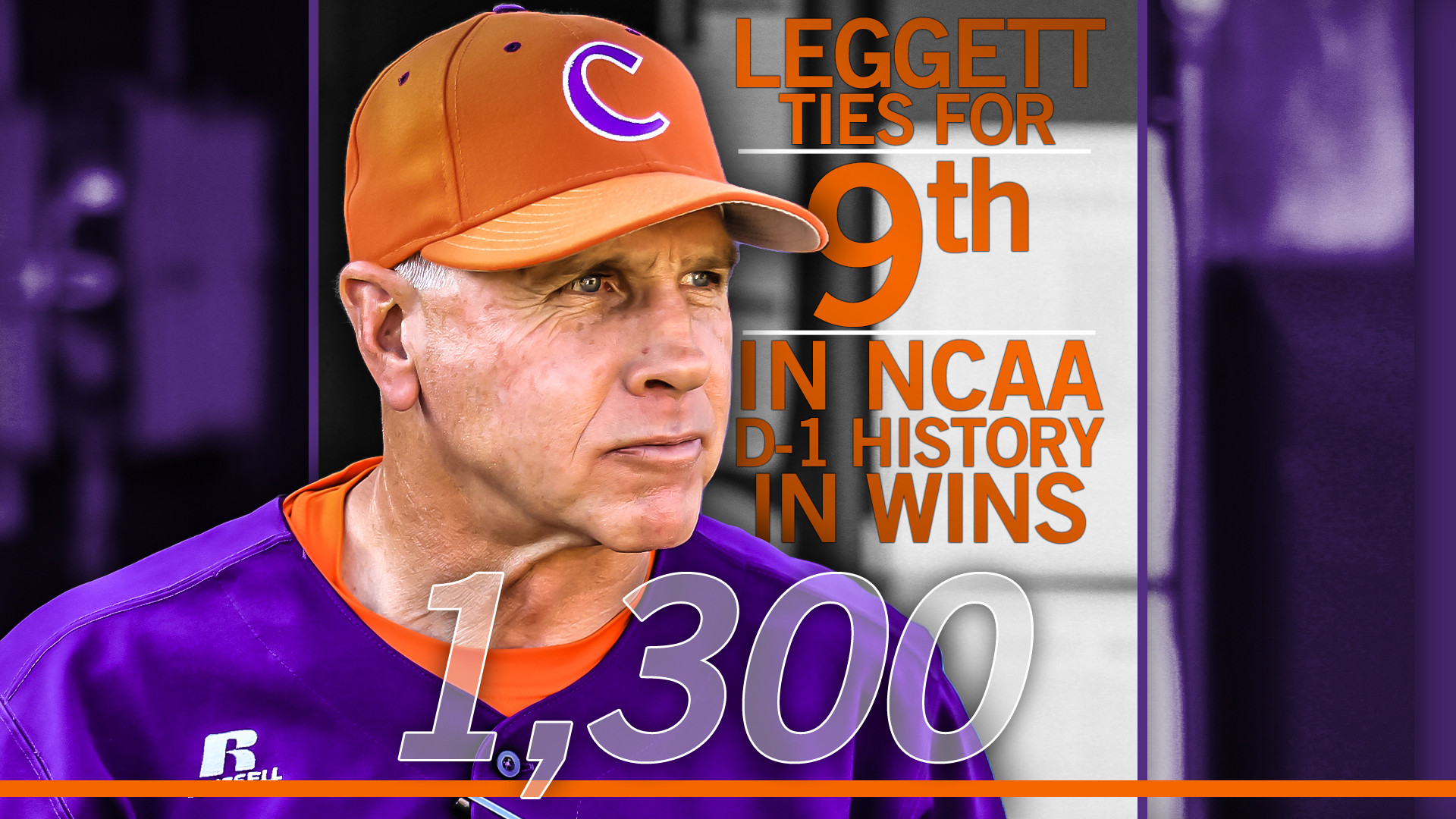 GREENSBORO, N.C. – Jack Leggett reached a major milestone in his coaching career Thursday night at NewBridge Bank Park, and it would have been awfully difficult to script it any better.

The Clemson head coach moved into a tie for ninth place on the list of the all-time winningest Division I coaches with the 1,300th of his career, as Steve Wilkerson’s ninth-inning single scored Tyler Slaton to deliver a 3-2 win over No. 3 Miami (Fla.) in the ACC Tournament.

“I guess if you’re going to have a milestone game, that would be the best way you’d want to win,” said Leggett. “That will be one I’ll remember for a long time.”

Jon McGibbon delivered the other big hit of the game with a majestic solo homer in the sixth inning to tie the score, and Leggett admitted it was fitting that two seniors, along with junior pitcher Daniel Gossett, played key roles in the Tigers’ biggest win of the season.

“It was a great game to have that 1,300th win with these guys,” stated Leggett. “They have been a part of many of them, and for Steve to get the big hit, Jon to get the big hit and ‘Goose’ to pitch like he did, it was an awesome evening for us.”

Of course, win No. 1,302 would be even sweeter if Leggett gets it this weekend.

The win over the Hurricanes moved the Tigers to 2-0 in the ACC Tournament with a chance to secure a berth in Sunday’s championship game with a win over Georgia Tech on Friday.

The Tigers (36-22) will meet the Yellow Jackets at 3 p.m. Friday and must win the game in order to advance to the ACC Championship Game.

“This one will fade away quickly if we don’t take care of our business tomorrow,” said Leggett.

Miami (40-17) was getting good wood on Gossett early and pulled ahead in the top of the third inning, as three hits, a hit-by-pitch and wild pitch plated the game’s first two runs. Things could have been worse for the Tigers, but Gossett got Brandon Lopez to line out to third with two more men in scoring position to end the inning.

The First-Team All-ACC selection settled down after that and finished with the kind of stat line that earned him those honors – 8.1 innings pitched, seven hits, two runs and eight strikeouts.

“He’s got the best breaking ball in the conference, and we knew it’d be a tough game for us,” said Miami Head Coach Jim Morris.

Trailing 2-1, the Tigers finally chased Miami starter Chris Diaz from the game with one out and two men on in the fifth after he hit Garrett Boulware with a pitch. Clemson put at least two runners on base every inning against the co-ACC Pitcher-of-the-Year, but he still exited with a 2-1 lead.

With Diaz out of the game, the Tigers quickly tied things up. McGibbon, who had replaced Shane Kennedy at first base in the top of the sixth, turned on a pitch from Cooper Hammond with one out in the bottom of the sixth and hit a high drive over the wall in right field to make it 2-2.

“I was just trying to be there for my guys, whatever they needed,” said McGibbon. “Coach Leggett called my number, I saw a couple pitches and he laid one right down the middle and I was able to hit the home run and tie it up.”

Gossett exited with one out in the ninth and the score still tied, then Drew Moyer stranded a man at third to keep the score tied.

Slaton drew a leadoff walk in the ninth, and two batters later, Steven Duggar singled to put two men on with one out. Wilkerson ripped the first pitch he saw into right field and Slaton blazed around third base to score the winning run.

“Coming into the game and coming into the tournament and being part of this class, we knew that every game was going to be a battle,” stated Wilkerson. “Tonight, coming up against Miami, we knew we had a challenge ahead of us. Being a senior, it was really fun to pull that one out.”

The victory was the 1,300th career win for Leggett in his 35th season as a head coach at the Division I level. He tied Bob Bennett for ninth place on the all-time list.

“He’s our ultimate leader,” said McGibbon. “You can’t ask for a better coach. We wouldn’t want anyone else out there with us.”