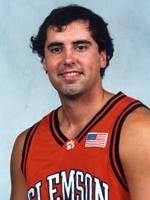 As a freshman, Walker Holt had an opportunity that many first-year players do not get – the chance to play.

“When I first got here, being a freshman, going right in and playing a considerable amount, I thought that was just great,” said the senior forward from Greensboro, NC. “I thought it made my whole reason for coming down here worthwhile; especially coming down here as a walk-on.”

Holt’s early playing time proved to be extremely valuable and he definitely made the best of it. In addition to scoring 34 points and grabbing 25 rebounds in 200 minutes, he had one of the best assist/turnover ratios on the team, holding a 1.67/1 margin. Not only did he get more minutes than most walk-ons, but he also got to play on some of the most prestigious courts in all of college basketball. Most notably, Holt got to start for Clemson against Maryland in Cole Field House and became the first walk-on to start for the Tigers in 14 years.

“I have always wanted to go to an ACC school and play,” he said. “Getting to play in places like Cameron Indoor Stadium, the Dean Dome, and getting to start at Cole Field House really made my commitment to play here worthwhile.”

Holt had the chance to play against some of the nation’s finest competition in some of the most recognizable facilities. Aside from his freshman playing experience, Holt’s game has also improved as a result of the multiple positions the coaches have asked him to play. Naturally a shooting guard or small forward, Holt has played almost every position possible, ranging from point guard to power forward.

“Playing multiple positions for Clemson has really improved my game,” he said. “My game has become more versatile and better overall.”

In addition to becoming more versatile, Holt has learned to better appreciate the hard work that some of his other teammates exert. “Having to play multiple positions has helped me understand the game more,” he said. “Playing down low in the post has made me appreciate what the big guys do. They get beat around a lot and sometimes do not get the ball as much.”

Despite his immediate game experience and his added versatility, Holt’s first year at Clemson was not always easy. Overwhelmed by preseason workouts, school and team commitments, Holt actually contemplated the idea of quitting the team. Although he was a walk-on invited to come to Clemson personally by the coaching staff, Walker knew no one. The numerous responsibilites that come with being a Divsion I athlete also proved to be a large burden.

“When I first got down here, playing basketball was more than I could even imagine,” he said. The amount of work you end up having to do ends up beings so much. And when you include school, it becomes even tougher. It was just so much.”

Holt fought against his struggles; until one day at practice, he finally gained the confidence he needed to compete. “I remember playing real well before practice one day, during individuals,” he recalled. “I played really well against some of the other guys on the team, and that is when I gained the confidence that made me realize that I can compete with the other guys on this team.”

Since his decision to come to Clemson, Holt has produced a list of reasons why he will reflect positively on his career once he leaves; and heading the list is his production numbers on the court. In 2000, Holt had a season-high five rebounds and three assists during his start against Maryland on Jan 22. He scored a career-high 14 points against Appalachian State on Jan. 19, and in one of the most impressive performances of his career, he scored eight points in a reserve role against Duke on Jan 29.

“(Playing at) Duke was great, just because I felt like I played well,” he said. “Against Duke and Appalachian State (in 2000), I felt like I played especially well. At Maryland, I thought it felt great to be able to start. I think Cole Field House was probably the loudest place I have ever played. I remember running back down the court and thinking to myself, ‘I could not hear myself talk right now.’ It was so loud.”

After the 2000-01 season, in which he saw action in eight games as a shooting guard and small forward, he saw action in 11 games the following year, including three ACC games. Holt netted a season-high four points in seven minutes against Coastal Carolina, and during midseason he was named ACC Student Athlete of the Week. This season, he has seen action in five games and started against High Point in what proved to be one of the most emotionally driven games of his career.

“I am definitely pleased with the way I have played,” said Holt as he thought about his playing experience. “But when we went to play High Point this season, being able to start there in front of family and friends from high school who were there, that was great! That was probably the biggest highlight of my career.”

Walker’s career at Clemson has developed through his play on the court, but in other ways as well. With the help of his fellow classmates, Holt has seen himself placed into a leading role on the team as a mentor this season. Holt, along with seniors Ed Scott, Jermel Douglas, Tomas Nagys and Ray Henderson, have addressed the area of senior leadership that Holt believes the team previously lacked.

“When I got here, we did not have a lot of senior leadership,” Holt said. “Andrius (Jurkunas) was our only senior, and he was very soft-spoken. He did not say much. Then we had Adam (Allenspach), who was the same way. Now, I think we have five guys, each at different positions, and I think that all of us are players that guys can come to and ask for advice.”

As a leader and a role model to the Tiger underclassmen, the coaching staff would be hard-pressed to find a better example. In addition to a tireless work ethic on the court and at practice, Holt has demonstrated an uncanny ability to balance academics and athletics. Last year, the management major won 2001-02 Fort Hill Clemson Club Award as the team’s top scholar. Furthermore, in one of the most rewarding moments of his career, the coaching staff awarded him with a scholarship.

“To know that I had been working so hard in preseason and then being able to play some, after not being sure about my scholarship situation, it was a great feeling,” he said. “When the coaches gave me my scholarship, I felt like they were sending me a message that I could really help this team in games. It was a way for them to give me more confidence.”

“Walker Holt has been a pleasure to have as part of our club that past four years,” said Coach Shyatt. “He gives us great versatility and experience in practice. He gives our program experience, he has started an ACC game and played during key moments many times in his career.”

“He has always been someone who has carried the respect of his teammates on and off the court, and all of his coaches, teammates and managerial staff have the utmost respect for Walker.”

After four years of consistent playing time, diligence on the practice court, and a commendable work ethic in the classroom, Walker Holt has developed into one of the most experienced leaders on Clemson’s team. The success he has enjoyed in his career would not be possible without the unwavering support he has received from his parents, the friends he has made at Clemson and his coaches.

“I would like to thank Coach Shyatt and the entire coaching staff for giving me the opportunity to come here to Clemson and play,” he said. “I also want to thank them for the confidence they have given me when I play. I know that I can do it.”

“I also want to thank my family again for all of the support they have given me. When I first got here and I was thinking that playing basketball was not for me, I would call home and they would always tell me, ‘If you do not want to do it, don’t do it; but do not quit and then regret it later on.'”