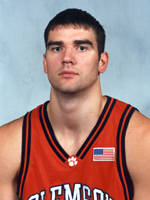 Tomas Nagys has been on a roll his last three games.

Not surprisingly, all three have resulted for victories for the Tigers, who have vaulted themselves up from last place in the standings into a tie for fifth place in the ACC. Clemson is making a convincing case for an NIT tournament berth and could possibly contend for an at-large berth in the NCAA tournament if the team continues to win.

If the Tigers expect to play well down this final stretch of the regular season, they need Tomas Nagys to continue to contribute the way he has over the past week. The 6′ 10″ senior from Mazeikiai, Lithuania has averaged over 11 points per game and has shot 80 percent from the free throw line. He sank two critical free throws in the final minute of regulation in Clemson’s 80-77 win over North Carolina last weekend, and he shot 8-8 from the line Saturday in the Tigers’ dominating 74-60 win over Florida State. He has also seen his playing time increase during this stretch, and his effort is making a difference.

Despite his notable recent play, Nagys has not changed anything about his game or the way he prepares to play. His recent contributions on the court are some of the payoffs for the work ethic he has maintained all season.

What matters the most to Nagys is that he shows up ready to play everyday. He is a hard worker and he thinks that sometimes people get the wrong impression about him. Despite whatever current misconceptions may exist, he believes that additional playing time and the team’s current winning streak have been huge factors in his on-court contributions and the team’s confidence, respectively.

“Winning always brings a lot of positive things with it,” he added about the team’s current streak. “Losing brings criticism and negativity; but when the team is winning, then everything seems fine and no one has any worries.”

The passion that Nagys exerts at practice and during games has reflected consistency throughout his career. He has averaged 3.7 rebounds and 4.1 points per game for his career and he also entered this season second on the team in career blocked shots with 37.

“I feel like I have to contribute to the team by grabbing some rebounds and making some hustle plays,” said Nagys about his rebounding ability. “I have to do some things that other people may not see. Different players have different goals, and I am just trying to play my role and do what the coaches ask me to do.”

Clemson’s soilid play has been the result of a cohesive effort, and team chemistry is important to Tomas Nagys. In fact, it was for this very reason that he decided to come to Clemson instead of Georgia Tech because he thought his transition to the college level would be easier. In addition, the fact that other Lithuanian players have enjoyed success playing for the Tigers in the past made Clemson eve more appealing. Nagys was able to make the transition to the collegiate level with the help of Lithuanian teammate and former Tiger Andrius Jarkunas, and as a senior this season, Nagys finds himself in the same position that Jarkunas was in for him.

“I did not decided on Clemson until the last minute,” Nagys said as recalled the tough decision-making process. “I did not know I would end up at Clemson, but I knew that my coach back home had a lot of connections in the United States, and he told me that there was a lot of possibility and opportunity for me to come here and play basketball. The thought of that was tremendous.”

“I really thought that Andrius Jarkunas was going to be a big brother to me,” he added about his former Clemson teammate. “He was. This season there have been times when I try to give advice to some of the freshman guys. Julian (Betko) is from another country and he is going through some of the things that I went through as a freshman. I offer him advice when I can.”

Although he has made solid contributions to this basketball team both on and off the court, Nagys is most thankful for the opportunity to play basketball at an elite level while obtaining a college education. He is so thankful for the fans and the academic advisors who have supported him along the way and will the chance to see him graduate in May.

“I am just happy to be here,” he said. “There are a lot of people who come to our games and support us. I want to thank all the fans for their support. It is so great to know there are people out there in the stands that support what I am doing so far away from home. “

“Since I have been here, I have learned a new culture and met a lot of great people,” he added about his Clemson experience. “I have accomplished my mother’s dream for me to get a college education. Plus I have been able to play in the best basketball conference in the country. What else could you ask for?”