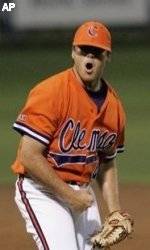 Seminoles Come to Town For Clash on the Diamond

Clemson (36-13, 18-6 ACC), ranked as high as #7 in the country, will play host to #13 Florida State (37-12, 14-9 ACC) this weekend in a three-game series at Doug Kingsmore Stadium. Game times are 7:15 PM (Friday), 4:00 PM (Saturday), and 1:00 PM (Sunday). Friday’s game will be televised live by Sun Sports, while Saturday’s game will be televised live by CSS. Saturday’s game was originally scheduled for a 7:00 PM start, but was changed to a 4:00 PM start to accomodate live television. All three games will be broadcast live on the radio by Clemson Tiger Sports Network. Live stats will also be available at ClemsonTigers.com for all three games.

Tiger Head Coach Doug Kingsmore Stadium. All 49 games Leggett has coached against Florida State have been against a Seminole team ranked in the top 25 by at least one poll, including 46 games against a top-10 Florida State squad.

The Starting Pitchers In game one, Florida State will start junior righthander Tyler Chambliss (10-3, 2.01 ERA) on the mound. The Live Oak, FL native has made 14 starts and one relief appearance for a total of 94.0 innings pitched. He has allowed 74 hits (.220 opponents’ batting average), 39 walks, and just two home runs with 93 strikeouts.

The Tigers will counter with junior righthander Stephen Faris (6-2, 2.69 ERA) on Friday. The Richmond, VA native had made 12 starts for a total of 63.2 innings pitched. He has a .223 opponents’ batting average, allowing 51 hits and 12 walks with 55 strikeouts.

The Tigers will counter with senior righthander Josh Cribb (8-0, 2.66 ERA) on Saturday. The Lake View, SC native has made 11 starts and one relief appearance for a total of 67.2 innings pitched. He has allowed 49 hits (.204 opponents’ batting average) and 18 walks with 70 strikeouts. In game three, Florida State will start senior righty Mark Sauls (1-0, 2.70 ERA) on the mound. The Panama City, FL native has made one start and four relief appearances for a total of 10.0 innings pitched. He made his one and only start of 2006 in the Seminoles’ 9-2 win over Jacksonville on May 3. He has allowed 10 hits and two walks with nine strikeouts.

Clemson will counter with junior righthander Jason Berken (7-3, 2.77 ERA) on Sunday. The De Pere, WI native has made 12 starts for a total of 61.2 innings pitched. He has allowed 60 hits and 27 walks with 61 strikeouts.

The Seminoles Florida State, led by 27th-year Head Coach Mike Martin, enters the series with a 37-12 overall record and 14-9 ACC mark. In their last games, the Seminoles played a rain-shortened series at Wake Forest, as they split with the Demon Deacons in Winston-Salem, NC. In the second game, the two teams battled for 20 innings. Florida State was victorious 4-3 and did not allow an earned run in the contest.

Righty closer Luke Tucker is one of four Seminoles with 22 relief appearances, and has a 1.52 ERA, eight saves, 38 strikeouts, and a .113 opponents’ batting average in 23.2 innings pitched. He also has allowed just nine hits (eight singles and one double).

The Tigers Clemson enters the series with a 36-13 overall record and 18-6 ACC mark. After the Tigers were off seven days for final exams, they swept Duke in a three-game series by a combined score of 29-6 on May 8,9 in Durham, NC. Clemson is in first place in the Atlantic Division standings and tied for first place overall in the league with North Carolina (18-6).

The team is hitting .296 with a .368 on-base percentage and 67 stolen bases in 85 attempts. Clemson also has 102 doubles, 56 home runs, and 38 sacrifice bunts in 49 games. The Tigers sport a .971 fielding percentage as well. In the last nine games, Clemson has committed just three errors.

All nine Tiger regulars in the field are hitting between .284 and .335. Tyler Colvin leads the team with a .335 batting average, 19 doubles, four triples, nine homers, 42 RBIs, and 14 stolen bases. Andy D’Alessio hit four home runs in the Duke series and has 17 long balls along with 64 RBIs on the season. Herman Demmink is riding a 10-game hitting streak as well.

Demmink (economics) along with righthanders Josh Cribb (PRTM) and Sean Clark (economics) all received their undergraduate degress in commencement ceremonies on Friday.

Polls Clemson climbed one spot to #7 in the Baseball America poll on Monday after a week off for final exams. The Tigers also remained at #9 in the Collegiate Baseball poll and jumped to #7 in the Sports Weekly poll.

Cribb, D’Alessio Added to Wallace Watch List Senior righthander Josh Cribb and junior first-baseman Andy D’Alessio were both added to the 2006 Wallace Award Watch List in May, which goes to the nation’s top player.

Double Dose of D’Alessio Andy D’Alessio home runs have come in bunches this year. In the three-game series at Duke on May 8,9, he had two, two-homer games. He has gone deep twice in a game on four occasions this season, therefore eight of his 17 home runs, nearly half, have come in multi-homer games. He had two, two-homer games in 2005 and has six in his career. D’Alessio also has 36 career long balls, ninth-most in Clemson history. Only Michael Johnson has hit more home runs in a season (25) among Tiger lefthanded batters than D’Alessio (17).

Demmink on His Second 10-Game Hitting Streak Graduate third-baseman Herman Demmink is riding a 10-game hitting streak. He is hitting .351 (13-for-37) during the streak and .296 overall as the leadoff batter in the lineup this season. It is his second 10-game hitting streak of the season, as he did the same earlier in 2006.

Clemson Sweeps Duke in Durham Clemson swept Duke in three games by a combined score of 29-6 in Durham on May 8,9. The Tigers out-hit the Blue Devils .371 to .157 and totaled 20 extra-base hits, including 10 doubles, three triples, and seven home runs along with a .690 slugging percentage. Andy D’Alessio was 5-for-10 with four home runs and six RBIs. Clemson’s pitching staff had a 1.33 ERA, as it allowed just 14 hits, four earned runs, and eight walks with 29 strikeouts.

In game one, Clemson hit nine extra-base hits and rallied for a 7-4 win over Duke in the first game of a doubleheader on May 8. Josh Cribb struck out 10 batters in 6.2 innings pitched.

In game two, 12 different Tigers contributed to Clemson’s 21-hit attack in a 14-0 victory over Duke in the second game of a doubleheader on May 8. Clemson scored six runs in the first inning and never looked back, as it had at least one hit in every inning. Casanova, Stephen Faris earned the win in a scheduled short start.

In game three, D’Alessio hit two home runs to lead Clemson to an 8-2 victory over Duke on May 9. Colvin added a home run, while Harbin added two hits, including a two-run single in the seventh inning. Jason Berken earned the win in a scheduled short start, while four other Tiger pitchers shut out the Blue Devils over the final 5.0 innings to close out the game. Duke, who had six hits, including four doubles, scored single runs in each of the first two innings, but were shut out the rest of the way.