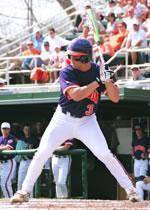 After scoring only two runs on 11 hits through seven innings, #2 Clemson scored two runs on no hits in the eighth inning and held on to defeat #25 Kansas 4-3 Sunday in front of 4,694 fans at Doug Kingsmore Stadium. Head Coach Jack Leggett picked up his 150th win over a top-25 team as head coach at Clemson as the Tigers improved to 10-3, and the Jayhawks dropped to 15-6.

Herman Demmink was 3-for-3 with two RBIs to lead the Tigers offensively. Travis Storrer and Andy D’Alessio also had two hits apiece for Clemson. Jared Schweitzer was 2-for-4 for Kansas, and Erik Morrison added a two-run home run.

Daniel Moskos pitched 1.0 scoreless inning of relief to earn the victory for the Tigers, improving to 1-1. Andy Marks suffered the loss for the Jayhawks, as he fell to 1-1. Steve Richard allowed one hit and one run in the ninth, but earned his third save of the season.

Demmink singled to lead off the first, and went to second on a sacrifice bunt by Brad Chalk. Taylor Harbin struck out, and Tyler Colvin hit a sharp single up the middle, but centerfielder Kyle Murphy fired home and home plate umpire Randy Watkins called Demmink out as he made a head-first slide.

John Allman singled to right to lead off the fifth, and then scored on Morrison’s two-run home run to left into a stiff wind, his fifth of the season.

Clemson had three hits in the fifth, but scored only one run. D’Alessio singled to lead off the inning, but was erased on a double play on a sharply hit groundball by Stan Widmann. Adrian Casanova singled through the left side with two outs, and advanced to second on a balk. Demmink singled to left-center to score Casanova.

The Tigers tied the score in the seventh. D’Alessio doubled off the fence in right to begin the inning, and went to third on a sacrifice bunt by Widmann. Pinch-hitter Marquez Smith struck out, but Demmink singled up the middle on a line drive that went off the shoulder of pitcher Kodiak Quick and scored D’Alessio. Chalk then had a bunt single, but Harbin grounded out to end the inning when shortstop Ritchie Price made a nice play up the middle and flipped to Schweitzer at second to force Chalk.

Clemson took the lead in the eighth without getting a hit. Colvin walked to lead off the inning, but was erased at second on Storrer’s sacrifice bunt attempt. Ben Hall was hit by a pitch, and D.J. Mitchell came on as a pinch-runner for Storrer. D’Alessio walked to load the bases, and Kansas brought in closer Don Czyz. Czyz threw a wild pitch that scored Mitchell, and Widmann then struck out on a fouled bunt attempt with two strikes. Another wild pitch by Czyz allowed Hall to score, which ended up being the winning run.

In the ninth, Schweitzer doubled down the left-field line with one out. A wild pitch advanced him to third, and Gus Milner walked. Harbin saved a hit with a diving play on a grounder by Allman, and threw him out at first as Schweitzer scored on the play. Richard then struck out Morrison to end the game.

Clemson will play host to Gardner-Webb Wednesday at 7:15 PM at Doug Kingsmore Stadium.