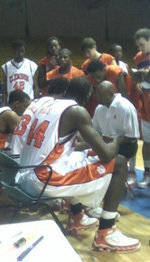 Defense carried the Tigers, who held Holy Cross under 50 points for the first time this season and limited the Crusaders to 37 percent shooting. Holy Cross scored the first basket of the second half to take a 26-25 lead, but Clemson turned up the intensity with a full-court press and would not trail the rest of the way.

“Our kids responded when they were challenged,” aid Clemson head coach Oliver Purnell. “It reminded me of the South Carolina game when we controlled the first half and they came out and tied it up a few minutes into the second half. But we responded, we kept fighting, and we played with resolve and determination.”

Cliff Hammonds scored 15 points while adding six assists, three steals and excellent defense on Holy Cross’s Kevin Hamilton, the reigning Patriot League Player of the Year. Hamilton scored 38 points in the tournament’s first round against UT-Chattanooga, but was held scoreless in the game’s first 16 minutes. He ended up with 13 points.

“What can I say about the job we did on Hamilton,” said Purnell. “Cliff Hammonds had him early, but all of our guys picked up the slack and helped out. I thought it was important he didn’t get into rhythm early because he is so dangerous.”

Clemson came up with 11 steals for the second straight game while forcing 21 Holy Cross turnovers.

“We felt like we had a chance to wear them down,” said Purnell. “We didn’t play guys major minutes yesterday. Their perimeter to start the game was very good, but their bench was not nearly as good. I thought it would take away their legs for three-point shots and I think the strategy paid off.”

K.C. Rivers had 12 points and five rebounds as the only other Tiger with double figure scoring. Akin Akingbala led the Tigers underneath with 11 rebounds.

Clemson can win its 23rd regular season tournament tomorrow and its first since taking the 1980 Rainbow Classic. The Tigers will also be looking to push their record to 11-0 for the first time since the 1995-96 season.