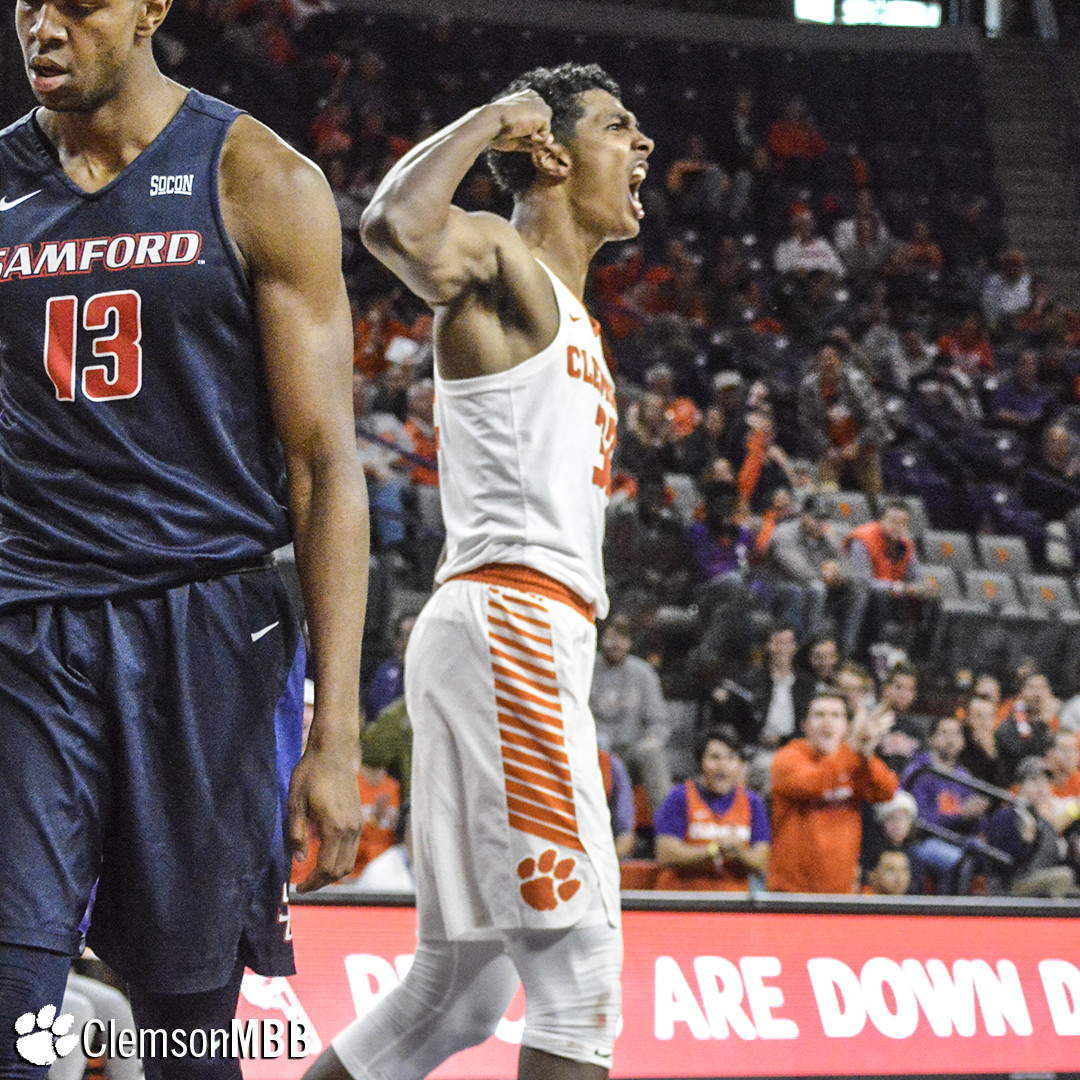 CLEMSON, S.C. — A 19-2 run late in the second half and five double-digit scorers propelled Clemson University men’s basketball to a dominating 81-59 win over Samford and moving the Tigers to 8-1 overall on the season – its best start since 2008-09.

Both Shelton Mitchell and Donte Grantham turned in the Tigers’ (8-1) sixth and seventh 20-point outings of the season. It served as a season-high for Mitchell. Elijah Thomas notched his fifth career double-double and third of the season with 11 points and 11 rebounds.

The Bulldogs (2-8) played the Tigers tightly in the opening stanza and trailed by just five points at the break.

Samford came out strong in the second half and regained a lead of four points at 42-38, which forced a Tiger timeout.

Out of the timeout, the Tigers quickly moved in front of the Bulldogs on the heels of a 6-0 run keyed by a Marcquise Reed old fashioned 3-point play. After Samford trimmed the Tiger lead to two at 55-53, the Tigers took off.

Gabe DeVoe and Reed also finished in double-figures for the Tigers with 14 and 13 points, respectively. Clemson rebounded from a poor-shooting first half to finish 41.7 percent from the field and connected on 22 free throws.

The Tigers grabbed a season-high 17 offensive rebounds which helped them earn 19 second-chance points. They also forced 22 Bulldogs turnovers and turned those into 22 points.

The Tigers will return to the court on Saturday, Dec. 16 when it travels to Sunrise, Fla. For the 2017 MetroPCS Orange Bowl Classic against the No. 5/5 Florida Gators. Tipoff is at 4:30 p.m. in the BB&T Center.

Notes: With the win, Clemson earns its best start to a season since 2008-09 … the Tigers improved to 4-0 all-time against Samford and 252-96 all-time against members of the Southern Conference … it was the Tigers fourth win this season by 20+ points … Grantham and Mitchell both scored the Tigers’ sixth and seventh 20-point outings this year … the 20 points for Mitchell was season high … Grantham is now 25 points shy of 1,000 for his career … Reed is now 18 points shy of 1,000 for his career … Elijah Thomas notched his fifth career double-double and third of the season with 11 points and 11 rebounds … DeVoe matched his career-high with four steals … the Tigers assisted on 17-of-25 made baskets (68.0 percent) … the attendance of 7,434 was the second-largest of the season in Littlejohn Coliseum … head coach Brad Brownell is now just one win shy of his 300th career victory (299).