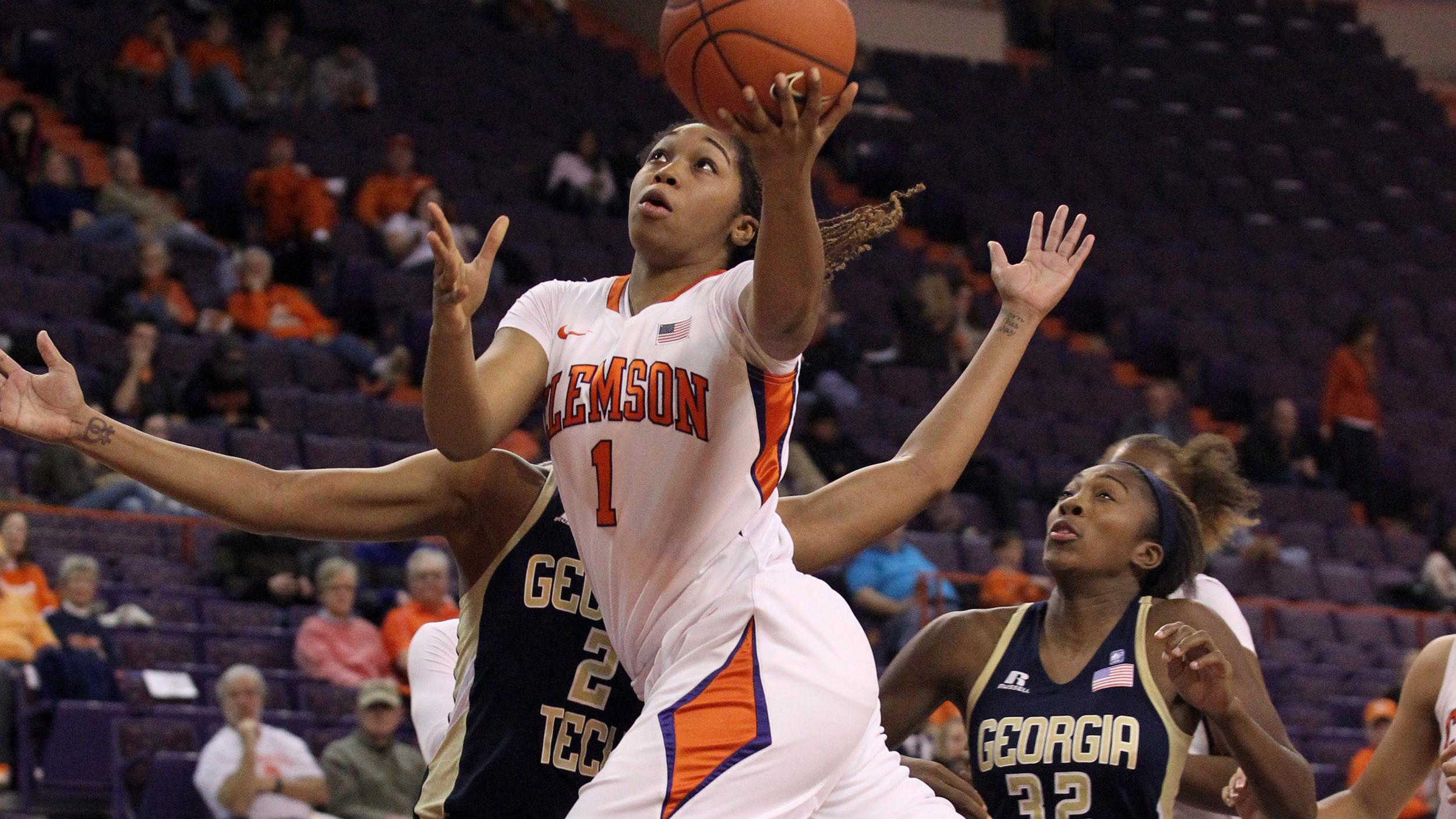 Final Score: rv/rv Georgia Tech 89, Clemson 68 Records: CU: 8-8, 0-2 ACC; GT: 11-4, 1-1 ACC Clemson Leading Scorer: Nikki Dixon: 26 points Updated Series Record (trend): CU, 42-29 (L9) Next Game: Clemson vs. Pitt; Jan. 12, 2014; 2 p.m CLEMSON, SC – The Clemson women’s basketball team saw two players score 20 or more points in a game for the first time in more than three years, but fell at home to Georgia Tech, 89-68, on Wednesday night. Nikki Dixon scored a career-high 26 points and Charmaine Tay had 20 for the Tigers (8-8, 0-2), falling a ninth straight time to the Yellow Jackets (11-4, 1-1 ACC), who are receiving votes in both national polls.  Clemson opened the game with a 15-9 to lead, but Georgia Tech’s pressure forced turnovers on eight of 12 possessions as the Yellow Jackets went on a 24-6 run to grab control. The Tigers rallied back to get within ten with 11 minutes to play, but the Yellow Jackets pulled away late for the win.  The Georgia Tech pressure sped up Clemson’s offense. The Tigers had 76 possessions in the game, approximately 13 more than they typically play. However, after committing 11 turnovers in the first half, the Clemson gave the ball away just five times the rest of the way, the 12th time this season the Tigers have had fewer than 20 turnovers.  Dixon, an Atlanta-area native, notched her career-best on 10-18 shooting, both tying career-highs, and a 6-9 mark at the free throw line. The Tiger junior had the 10th game of her career scoring 20 or more points, while also registering five steals, four rebounds, and a charge taken, the 20th of her career.  Tay’s 20 points came on a 6-12 mark from the floor (2-4 from behind the arc), and matched Dixon with a 6-9 mark from the free throw line. Tay also had a team-high eight rebounds, and a career-high-tying four steals.  Another Atlanta-area Tiger, Chancie Dunn, scored 14 points and had three assists in a team-high 35 minutes. Georgia Tech freshman Kaela Davis, the No. 2 recruit in the 2013 class, had 26 points for the Yellow Jackets, while two-time All-ACC selection Ty Marshall had 25 points. Forward Rodreka Rogers had 17 points and 14 rebounds for Georgia Tech, who shot an opponent-season-high .552 (32-58) from the floor.  The game took more than two hours to complete, as each team committed 22 fouls, and there were a combined 54 free throws.  Clemson will bounce back with a Sunday contest in Littlejohn against Pittsburgh at 2 p.m. It will be the first meeting between the teams as conference foes, and the programs have not met since the 2004-05 season.  Player of the Game: Nikki Dixon – The junior wing scored a career-high 26 points on 10-18 from the floor and had six takeaways, including five steals and a charge taken.  Stat of the Game: 60 – Tonight marked the first time this season that Clemson scored more than 60 points, yet lost the game. Clemson had been 5-0 on the year.  Clemson vs. Georgia Tech Notes Littlejohn Coliseum • Clemson, SC January 8, 2014 Team Notes * The Tigers outrebounded the Yellow Jackets 21-18 in the first half. The Jackets took the rebounding margin in the second half to edge the Tigers 37-30 for the game. Georgia Tech has won the rebound margin in 14-of-15 games this season. * Clemson recorded 10 steals as a team, tied for the second most this season. The Tigers had 12 steals NJIT on January 2.  * Clemson had two players score at least 20 points in a game for the first time since January 3, 2011 against North Carolina A&T. In that game, Kirstyn Wright scored 24 points while Shaniqua  Pauldo racked up 22 points.  * Clemson lost despite scoring at least 60 points for the first time since February 3, 2013 against Florida State. The Tigers fell to the Seminoles 61-83 in that game. The Tigers are 11-3 over the past two seasons when scoring at least 60 points.  Individual Notes * Atlanta area native Nikki Dixon scored a career-high 26 points in the game. That is the most points by a Tigers since Kirstyn Wright had 29 points on November 14, 2010 against Charleston Southern. It was 10th game of Dixon’s career in which she scored at least 20 points and her third in the last four games. Her previous career high was 25 against Jacksonville on December 2, 2012. * Dixon added a season-high five steals and recorded her fourth charge taken this season and 20th of her career. She also tied a career high with 10 field goals made and set a career high with 18 field goals attempted.  * Charmaine Tay recorded double-figure points in the first half scoring 13 points. She finished the game with 20 points and four steals. It sixth time this season that Tay recorded double figures. Tay also tied a career high with four steals in the game.  * Chancie Dunn scored 14 points in the game, including 12 in the second half on 5-of-7 shooting. Audra Smith Quote: “The biggest thing for me is that we competed. We got down big and were able to cut the lead to 10 but we just couldn’t get over the hump.” [<a href=”//storify.com/ClemsonTigers/clemson-vs-georgia-tech” mce_href=”//storify.com/ClemsonTigers/clemson-vs-georgia-tech” target=”_blank”>View the story “Clemson v. Georgia Tech (January 8th, 2014)” on Storify</a>]