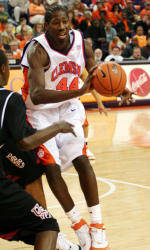 NORFOLK, Va. (AP) – James Mays scored eight of his 18 points during a 22-6 second-half run Saturday as Clemson rallied to a 77-65 victory against Monmouth.

Deljan Delic had 18 points and Whitney Coleman 17 for Monmouth.

Booker and Cliff Hammonds added 12 points each for the Tigers, and Vernon Hamilton and K.C. Rivers had 10 each on what its a homecoming weekend of sorts for coach Oliver Purnell. He graduated from Old Dominion, the team the Tigers will play on Sunday.

Mays also had nine rebounds, five steals and four assists for the Tigers.