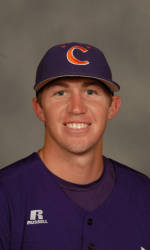 Three Seahawk relievers tossed 4.2 scoreless innings to lead UNC Wilmington to a 4-3 win over #19 Clemson in front of 4,408 fans at Doug Kingsmore Stadium on Sunday afternoon. The Seahawks improved to 26-19, while the Tigers, who won the series 2-1, fell to 34-17.

The Tigers scored two runs in the fifth inning to tie the score 3-3, but the Seahawks responded with a run in the sixth inning to take the lead. The Tigers then put their leadoff batter on base in the sixth, seventh, and eighth innings, but they failed to even the score each time.

The relief pitching of Stephen Harrold, Ryan Walker, and Bryan Booth limited Clemson to just two hits and no runs in the final 4.2 innings. They were a big reason the Tigers were just 1-for-11 with runners in scoring position a day after going 7-for-9 in that situation.

Tiger reliever Tomas Cruz (2-3) suffered the loss, as he allowed one run on two hits in 1.0 innings pitched.

For the sixth game in a row, all of which have been at Doug Kingsmore Stadium, the Tigers grabbed the game’s first lead. In the second inning, Wilson Boyd led off with a triple to right-center and scored on Matt Sanders’ groundout to second.

The Seahawks responded with two runs on three consecutive hits in the fourth inning to take the lead for the first time in the series. Cody Stanley led off with a triple over the first-base bag and scored on Andrew Cain’s single through the left side. Matt Holt followed with a double down the right-field line to score Cain. But Chris Dwyer kept the Tigers within one run by retiring the next three Seahawks, including two on strikeouts.

UNC Wilmington added to its lead in the top of the fifth inning. Ben Thielsen led off with a walk. Three batters later, Stanley hit a two-out double to left-center to plate Thielsen, giving the Seahawks a 3-1 lead.

In the bottom of the fifth inning, Brad Miller led off with a bunt single and advanced to third on Chris Epps’ single through the right side. Two batters later, Jeff Schaus belted a double to right-center to score Miller and Epps.

The Seahawks quickly regained the lead in the sixth inning. Holt led off with a single to left-center and moved to second on Robbie Monday’s groundout. Pinch-hitter Alex Hill then slapped a single through the left side to advance Holt to third, then Rooney lofted a sacrifice to left to score Holt.

After the Tigers put their leadoff batter on base in both the sixth and seventh innings without scoring a run, Boyd led off the eighth inning with a single up the middle on an 0-2 pitch. Sanders’ sacrifice bunt advanced Boyd to second, then John Nester popped up for out #2. Miller followed with a hard-hit ball, but it was a one-hopper right at Thielsen at second base. He threw to first base for the inning-ending out, as the Seahawks maintained a 4-3 lead.

In the ninth inning, Schaus drew a two-out walk, but Ben Paulsen popped up to end the game.

Stanley led the Seahawks by going 3-for-4 with a double and triple. Cain and Holt added two hits apiece as well.

Boyd was 3-for-3 with a triple and walk to lead Clemson, who outhit the Seahawks 10-8. The Tigers put 13 batters on base in the game, but they only scored three runs and left 10 runners on base.

Despite falling in the series-finale, Clemson outscored the Seahawks 27-9 and outhit them .350 to .243 in the series. Boyd was 5-for-8 (.625) with a double, triple, four runs, and three walks to lead the Tigers in the series.

Of the Tigers’ 17 losses in 2009, an incredible 16 have been by four runs or less and 14 have been by three runs or less. Clemson has a remarkable record of 17-1 in games decided by five runs or more this season.

Clemson will travel to Greenville, SC to play Furman at Fluor Field on Monday at 4:00 PM.