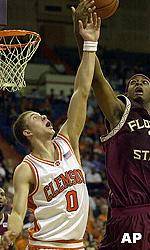 The win means Clemson (13-15, 4-11) can still finish sixth in the ACC if the Tigers beat North Carolina at Chapel Hill for the first time ever and get a little help. But Clemson, who has finished last in the league two years in a row, can still end up in the basement.

Florida State lost a chance to finish sixth in the league and avoid Duke or Maryland in the ACC tournament quarterfinals.

The Seminoles, who fell behind by as much as 19 early in the second half, cut the deficit to six at 78-72 on Delvon Arrington’s 3-pointer with 2:27 to go.

On the next possession Arrington stole the ball, then missed a long jumper on the fast break. The Seminoles had two chances to tip in the rebound, but couldn’t do it.

Scott would hit 7-of-8 free throws in the last two minutes.

Chris Hobbs had 11 points, and Ray Henderson added 10 points and 11 rebounds for the Tigers.

Florida State jumped out to a 10 point lead early, but then Scott got hot.

Scott started the run with a 3-pointer, and scored 12 of his 14 first half points during the seven-minute stretch.

The contest was Clemson’s last home game of the season, and the students serenaded coach Larry Shyatt with chants of “Larry, Larry” late in the game.

Shyatt’s coaching future might be in jeopardy, as the Tigers have to beat North Carolina and win a game in the ACC tournament to avoid their third-straight losing season.

The game may also be Clemson’s last in Littlejohn Coliseum for quite a while. Major renovations on the 34-year-old arena have already begun, and there are questions whether the work will be finished before next season.