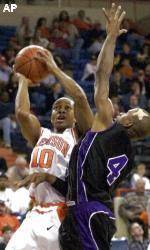 Scott Named Player of the Week

Clemson guard Edward Scott, who averaged 30.5 points, 5.5 rebounds and 5.0 assists in a pair of ACC victories, has been named ACC Player of the Week. In being the first-ever Clemson player to earn back-to-back ACC Player of the Week honors, the 6-0, 175-pound Eastover, S.C., senior made 20 of 39 field goal attempts and 16-of-21 free throws on the week as Clemson posted wins over Virginia and Florida State. In Tuesday’s win at Virginia, he had a season-high 32 points, eight rebounds and four assists. In Saturday’s victory over Florida State, Scott had 29 points, six assists and three rebounds.

Scott was also named the national player of the week on espn.com by Dick Vitale.

Wake Forest’s Justin Gray, who averaged 15.0 points and 2.0 assists in three games last week, has been tabbed as the ACC Rookie of the Week. In Thursday’s win at Georgia Tech, the Charlotte, N.C. product scored 20 points and handed out two assists in a 75-67 win. In Sunday’s come-from-behind 75-71 win over Virginia, Gray had nine points to go with four assists and one steal and his acrobatic three-pointer with 1:40 remaining was the game-winner.