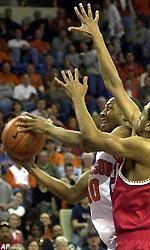 Scott Named Co-Player of the Week

Blake, the school’s all-time assists leader, scored Maryland’s final seven points, including four free throws in the final 17.5 seconds, as the 16th-ranked Terrapins snapped a two-game losing streak with a 74-72 victory at Florida State Wednesday night. Blake finished 15 points, made a 3-pointer from the corner to break a 67-67 tie with 2:36 left and then clinched the win with his clutch free throws. Scott averaged 23.0 points, 3.5 rebounds and 2.5 assists in two Clemson games last week. Scott tallied 25 points, including 18 in the second half, in Saturday’s 80-77 win over North Carolina. Scott connected on nine-17 field goals, including 3-4 three-point goals in the two games.

North Carolina’s Raymond Felton, who had 21 points, five assists and two steals in Wednesday’s 81-67 win at Virginia, has been tabbed as the ACC Rookie of the Week. On the week, Felton hit on eight of 19 three-point field goal attempts and averaged 20.0 points, 6.0 assists and 2.5 rebounds in two games.