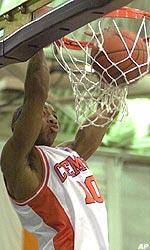 ANDERSON, S.C. (AP) Edward Scott scored a game-high 24 points to lead Clemson to a 78-61 victory over Winthrop in a non-conference game Thursday night at the Civic Center of Anderson.

Scott, who has led Clemson in scoring in every game this season, was 4-for-5 from 3-point range, 8-for-10 from the free throw line, and had nine rebounds and four assists.

The Tigers tied a school record for 3-point percentage in a single game by making 8 of 10 from behind the arc.

Chey Christie added 15 points and eight assists for the Tigers.

Winthrop, 4-5 overall, is now 1-7 against Clemson and 1-27 all-time against Atlantic Coast Conference schools. Pierre Wooten led the Eagles with 14 points. Josh Grant had 12, and Sheldon Bailey 10.