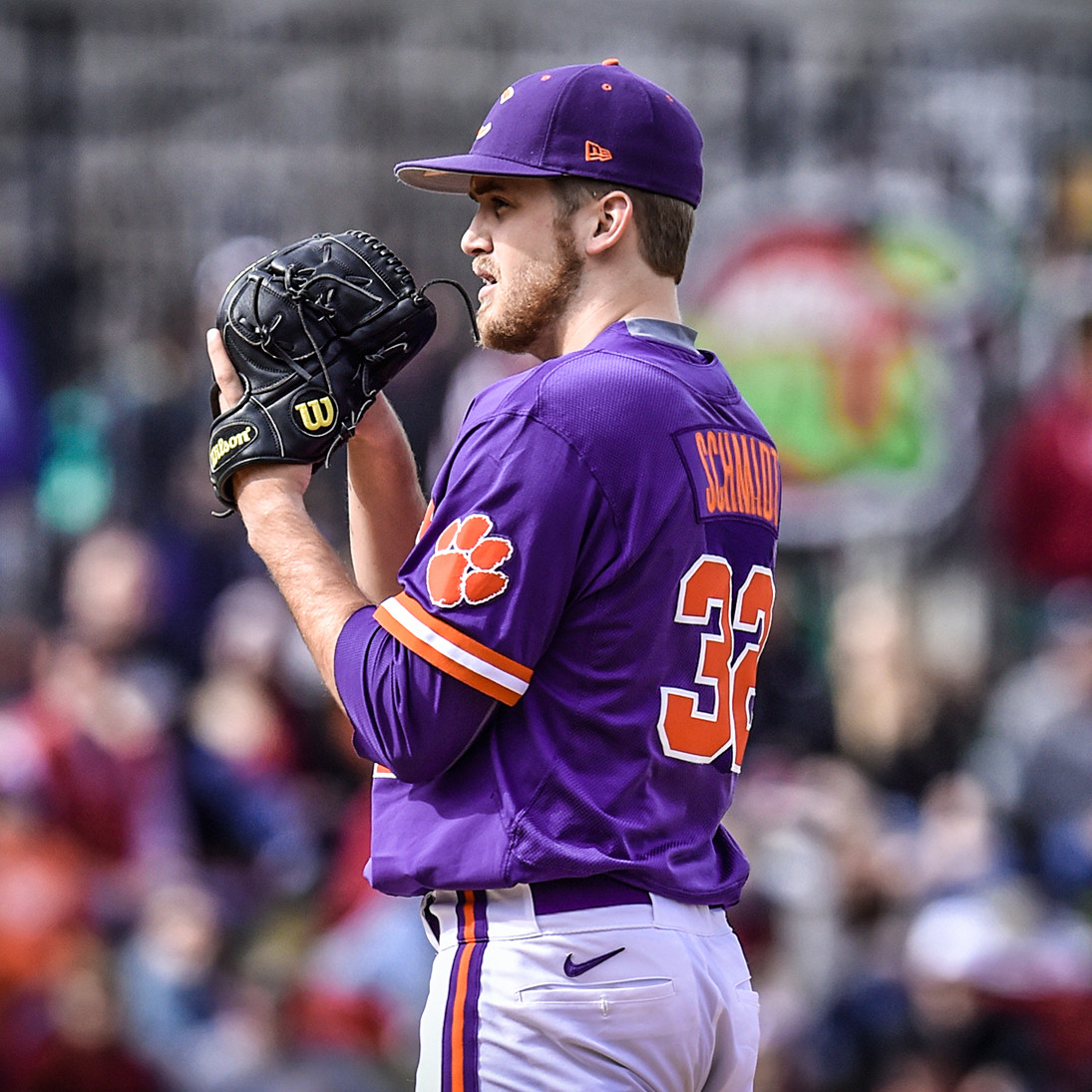 Schmidt Does It Again

Just one day after his younger brother pitched 8.0 scoreless innings for the South Carolina Gamecocks, Clate Schmidt pitched the game of his life for Clemson in front of Fluor Field record crowd of 7,216 fans in Greenville.

The senior righthander faced 21 Gamecock batters in 5.1 innings on Saturday and only allowed one hit to a team that plated eight runs Friday to earn the win in Tigers’ 5-0 victory.

“What a great win,” said head coach Monte Lee. “I’m really, really proud of my team and how they responded after a tough loss last night. We really needed our guys to have a short memory and bounce back.

“I told the team before the game that ‘when you’re faced with adversity, you have to keep swinging, you have to keep fighting and you have to compete.’ I thought we did an outstanding job of that today. And it all started with Clate Schmidt. When we needed a big start from a veteran pitcher, we got one in Clate today. He did an unbelievable job.

“Clate has pitched in big situations like this game before and has had success, so we felt very good with him today. We felt like if there was anybody that could get us back into this thing and even the series up after a tough game one, it was Clate Schmidt.”

The Tigers are 2-4 all time against their rival at Fluor Field, and Schmidt holds both of those wins. In 2013 as a freshman, Schmidt pitched the Tigers to victory over the No. 7 Gamecocks in what was just his second career start. In 2016, as a senior leader, Schmidt shut down South Carolina once again.

“That’s the best I’ve seen Clate pitch,” stated Lee. “For him to have his best outing in a huge game for us says a lot about Clate Schmidt.”

Schmidt said that the rivalry series was a large part of his motivation in getting back to top form while battling cancer last summer.

“Selfishly, that tunnel vision was looking ahead to this game and this series,” said Schmidt of his journey back to pitching. “I was overwhelmed with emotion, even during the game. It made it even sweeter that our team performed extremely well today after handling adversity last night. We were able to show that we are an extremely competitive team that is a force to be reckoned with.”

With the win in Greenville, Schmidt and the Tigers have the chance to take the series in Clemson on Sunday, an outcome that the righthander said was his biggest objective going into his start.

“My main concern was to be able to swing the momentum into our dugout going into tomorrow. My job was to go out there and give us a quality start and give our offense every opportunity they can to put some runs on the board, and they did exactly that.”

The rubber matchup is set for 2 p.m., Sunday at Doug Kingsmore Stadium on ESPN3.