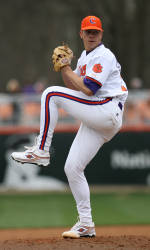 “I’d run out of the dugout every inning and yell, `Let’s keep it close this inning,'” said Stoneburner, who saw his team trail by one inning entering the bottom of the ninth inning despite getting the leadoff runner on base the final seven innings.

Stoneburner did his job, allowing just two hits over the final 4 2/3 innings as the Tigers rallied in the ninth for a 5-4 victory on Schaus’ two-run double.

For the first eight innings, the No. 15 Tigers squandered scoring chance after scoring chance against Tech pitchers Ryan Dennick and Lee Henry, who combined to allow only eight hits.

“We played with fire, absolutely,” said Tech coach Matt Bragga. “A great team is finally going to take advantage of that.”

Tech (30-23-1) finally got burned when Schaus ripped a Henry slider just inside first base and into the corner, allowing Addison Johnson to score from second and Chris Epps to score the winning run from first.

“He kind of hung one up there,” Schaus said, who also homered in the fifth.

Like the Tiger offense, Stoneburner (7-3) started slow on the mound. Entering in with one out in the fifth, he threw two wild pitches, helping the Golden Eagles tack on two runs for a 4-1 lead.

“I choked on a couple sliders,” Stoneburner said. “But I got better and just tried to keep the game in reach and give us a chance at the end.”

The Tigers looked tight throughout the game, especially at the plate.

Dennick, a left-hander, kept the Tigers off-balance and effectively worked out of jams. Henry (9-3) walked two hits to begin the Tiger eighth, but escaped with a one-run lead intact.

“In was really frustrating the first eight innings,” Schaus said.

But Johnson opened the Tiger ninth with a bloop single to left and Epps beat out a bunt to the right just out of Henry’s reach. Henry struck out Mike Freeman before Schaus’ game-winner.

“We were a little uptight,” Clemson coach Jack Leggett said. “But we kept ourselves in the ballgame mentally.”