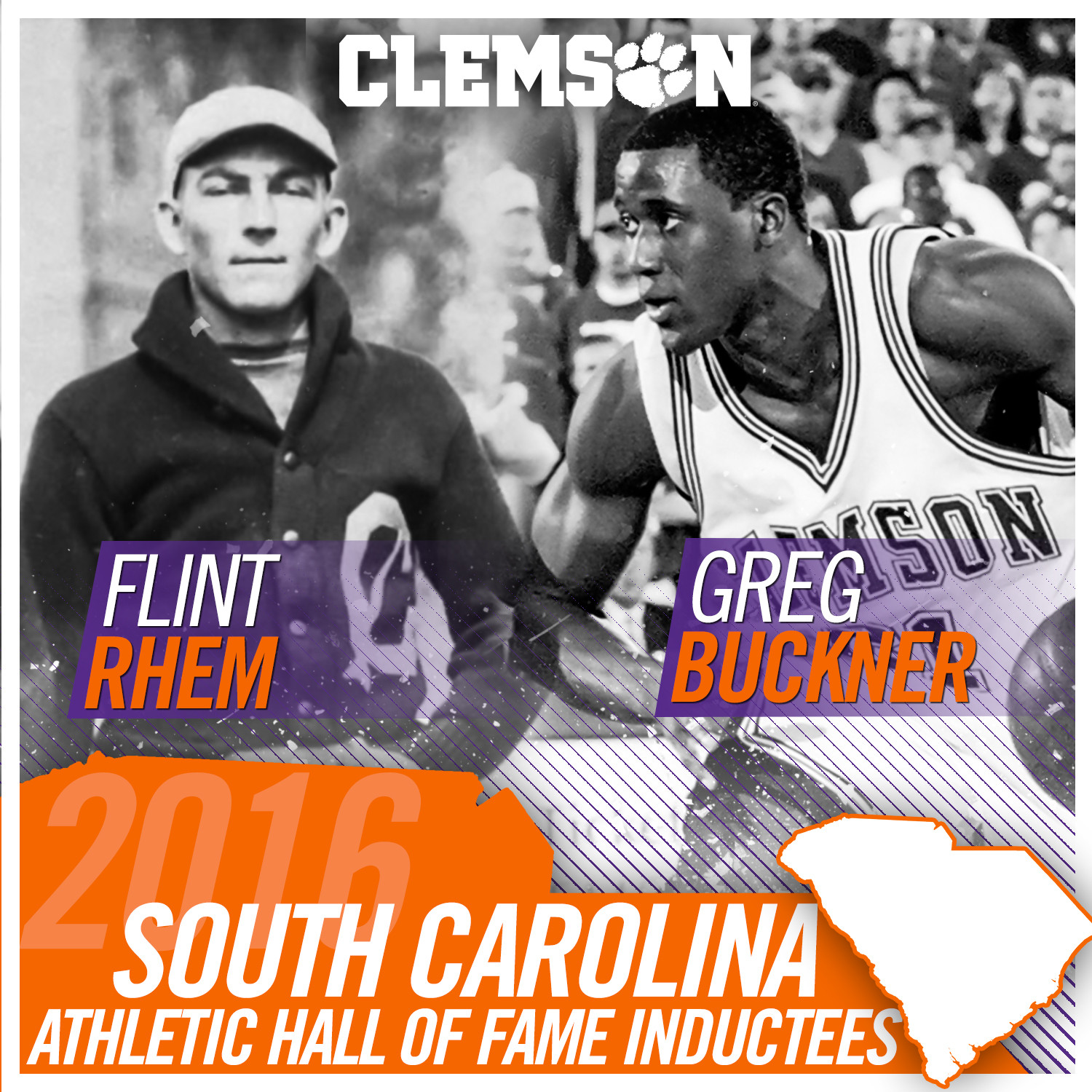 CLEMSON, S.C. – Former Clemson Basketball and NBA great Greg Buckner and Tiger baseball star Flint Rhem, who spent 12 years in the majors, will be inducted into the South Carolina Athletic Hall of Fame (SCAHOF), announced by the organization on Monday.

The eight individuals will be forever enshrined with the state’s highest athletic honor on May 16 at the Columbia Metropolitan Convention Center. Tickets (table of eight for $600 and individual tickets are $75) and program sponsorships may be purchased by calling the SCAHOF office at 803-779-0905. The affair, which includes a reception and dinner, begins at 5:30 p.m.

In addition to the inductees donning of the symbolic blue jackets, the annual Bobby Richardson Sportsmanship Award recipient will also be recognized. The event, which includes a host of returning past inductees, is the largest annual celebration of Palmetto State sports stars under one roof. Legendary SC State coach and 2008 SCAHOF president Willie Jeffries, known for his witticism, will again preside over the banquet as master of ceremonies along with executive director Ephraim Ulmer and this year’s president, Sam Blackman of Clemson.

A four-year starter for the Tigers from 1994-98, Greg Buckner was enshrined in the Clemson Athletic Hall of Fame in 2005. Fourth on the Tigers’ all-time career scoring list with 1,754 points, he averaged 14.4 points per game. Buckner recorded 97 double-figure scoring games during his career, tied for first in school history.

Starting 122 consecutive games, he participated in the 1997 U.S. Olympic Trials, the 1998 NABC All-Star Game and the 1997 World University Games. He was a member of the 1995 All-ACC Freshman team and was the ACC Rookie-of-the-Year. A three-time Clemson team MVP, Buckner earned 1997 and 1998 Second-Team All-ACC honors, 1996 First-Team All-ACC Tournament recognition, 1997 NABC First-Team All-District honors and NABC Second-Team All-District recognition in 1998.

Flint Rhem starred in baseball for the Tigers in 1922 and 1923, and later became a pitcher for the St. Louis Cardinals. Rhem, who left Clemson after his junior year to sign with the Cardinals, had an impressive junior season that caught the eye of famous baseball scout Branch Rickey. In 1923, Rhem had a 7-2-1 record.

He had 136 strikeouts for a 15.1 per-game average, and also had a pair of one-hit games that season and gave up only 40 hits all year (4.4 hits per game). In a contest against Furman on April 30, 1923, Rhem had 21 strikeouts and gave up only five hits in 13.0 innings pitched with the game ending in a 3-3 tie. He gave up only six runs the entire year and had an 0.57 ERA with four shutouts. His ERA and strikeouts per game average remain as school records.

He once pitched a no-hitter (in 1924, one year before his rookie season in the majors) while playing for the Fort Smith (Ark.) minor league team. He struck out 16 batters in the game and made it in “Ripley’s Believe It or Not” by not allowing a ball to be hit out of the infield.