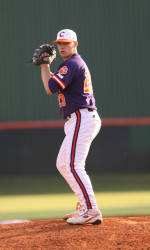 Sarratt, a 5-10, 175-pound sophomore from Clemson, earned the honor for the second straight week. This time, he went seven complete innings of four-hit baseball, while striking out eight to get the win and keep a perfect 0.00 ERA on the week for the HiToms.

Overall, the right-hander is 3-1 with a 1.44 ERA through four starts, including one complete game. Sarratt has pitched 31.1 innings, allowing just six runs, five earned, on 19 hits to go with five walks and 29 strikeouts.