Ryuhei Azuma has already made a name for himself within the tennis community. As the No. 69 ranked junior on the International Tennis Federation (ITF) circuit and the No. 2 ranked recruit in his home country, the freshman from Osaka, Japan is looking to continue to grow his game at Clemson.

Azuma began playing tennis at an early age and has loved the game ever since. His father is a tennis coach who got him started in the sport around the age of eight.

Prior to attending Clemson, Azuma competed in numerous ITF Junior events, where he played against some of the world’s top, young tennis athletes. Azuma has beaten nine of the top-100 players, including five in the top 50 the last two years.

In July 2019, the freshman won the J2 Shanghai event, dropping just one set along the way. Additionally, Azuma qualified for the U.S. Junior Open and Australian Junior Open.

“When I win a match, I am very happy,” said Azuma. “That feeling does not compare to other things. It feels really good.”

For Azuma, tennis is a top priority. When choosing where he would spend his future, for the first year, he wanted to be able to continue playing tennis at a high level while also furthering his education at a university that would best suit his needs. Azuma believed Clemson was the best place to do so.

“When I visited here last year, I was excited, because there was a great facility here and great coaches and teammates. I thought it would be better than Japan for tennis and for studying English.” 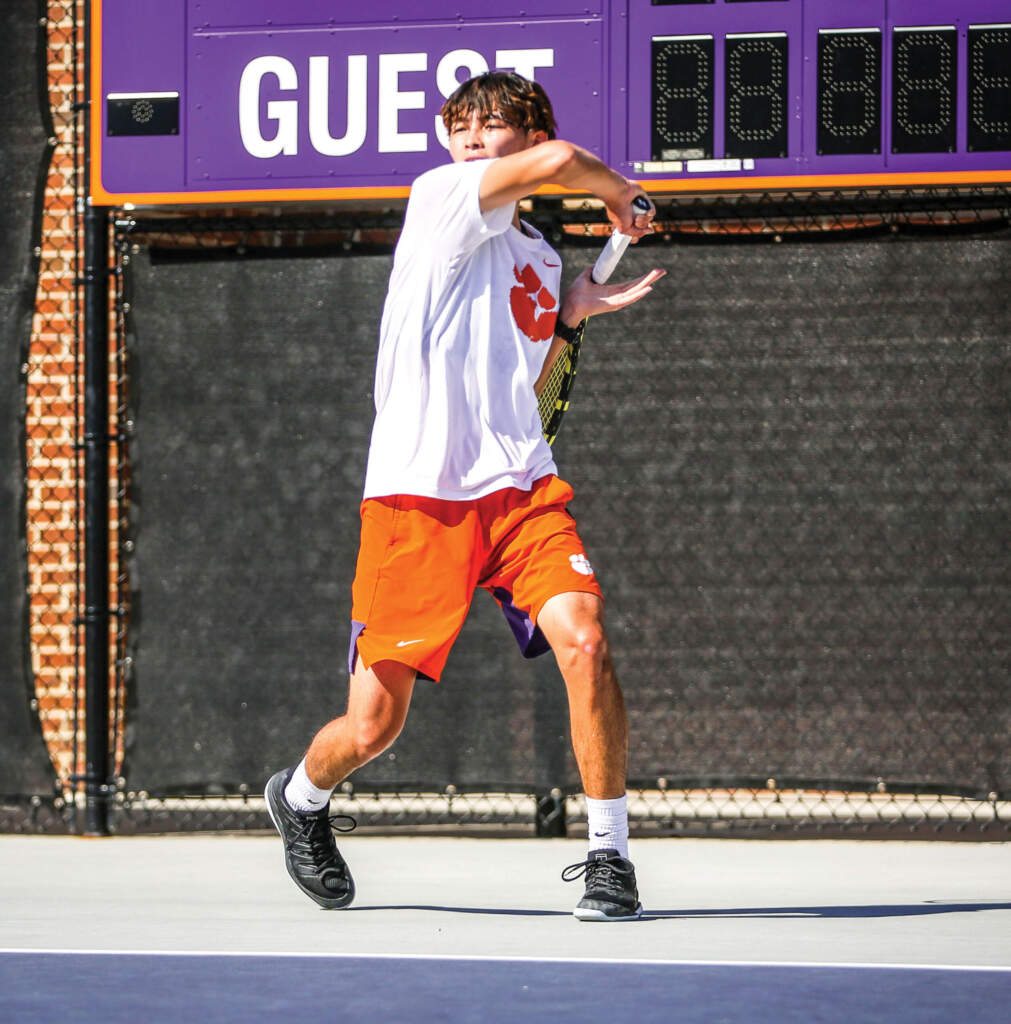 Moving across the world, 7,042 miles to be exact, is not an easy thing to do, but Azuma has made the best of it and has been adjusting to life in South Carolina.

“Everything is different from Japan. At first, I was very confused about the culture, but now I am enjoying it. My favorite things about Clemson are the team and the coaches.

Azuma joins the Tiger squad as one of five athletes in second-year Head Coach Robbie Weiss’ first recruiting class at Clemson. Earlier this year, the 2020 Tiger freshmen were ranked as the No. 2 recruiting class in the nation, the highest ranking by an incoming class in program history.

“It has been a real pleasure having Ryuhei at Clemson this fall,” said Weiss. “You will not find a nicer and more kind individual who is always smiling and enjoying life.

“Ryuhei is handling the transition from living in Japan to Clemson very well. Although there are some challenges for him, Ryuhei is taking things in stride and working incredibly hard on the court and in the classroom. I could not be more proud of Ryuhei, and I am so thrilled to have him be a part of our program.”

Azuma continues to set high expectations for himself. While at Clemson, Azuma hopes to compete for an NCAA title and go on to be a professional player on the ATP Tour following his graduation.

“I want to become a professional tennis player. Of course, I want to play on the ATP Tour, and I also want to play in the NCAA Championship.”