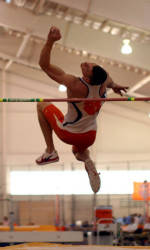 The first day of competition for the ACC Indoor Track & Field Championships was held Thursday at Clemson’s indoor facility. Four out of the seven events that make up the men’s heptathlon were held, with Ryan Koontz of Clemson leading the way with 3,051 points.

Koontz totaled 3,051 points and was impressive in the high jump, the final event of the afternoon on Thursday. Brent LaRue of Wake Forest sits second with 2,937 points, while Roland DaSilva is third with 2,878 points. Joey O’Rourke is 10th at 2,616 total.

Koontz ended the day in exciting fashion by outlasting North Carolina athlete Mateo Sossah in the high jump. Koontz cleared a personal best 6’9.75″ to take the high jump portion of the heptathlon. He collected 878 points in that event alone, which elevated him from third place to atop the standings.

The heptathlon will conclude Friday, beginning with the 60m hurdles at 12:00 PM. The long jump competition will start the other men’s events on the second day of competition at 1:00 PM.