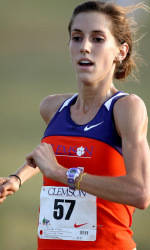 CLEMSON, SC – Kim Ruck of the women’s cross country team was named Co-ACC Performer-of-the-Week on Monday after winning the individual title over the weekend at the Clemson Invitational. She led the Tigers to an easy team victory at the event and set a personal best in the 5K as well.

Ruck, a native of Greer, SC, shared the weekly honor with freshman Laura Hoerr of NC State. The Tigers’ junior standout produced an outstanding time of 16:47.09 and easily dominated the field, winning by greater than 51 seconds over her closest competitor. Clemson took the team championship with a total of 22 points, 42 more than runner-up Charlotte.