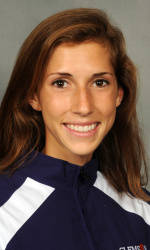 GREENSBORO, NC – Clemson sophomore Lauren Reen were among 24 student-athletes named to the 2009 All-ACC Academic Team for women’s cross country on Thursday. To be eligible for consideration, a student-athlete must have earned a 3.0 grade-point average for the previous semester and maintained a 3.0 cumulative GPA during her academic career.

This is the second straight year Ruck has received the honor from the conference office. Ruck was an All-ACC standout last fall in cross country, finishing ninth at the league meet in Cary, NC. It was the highest finish by a female cross country runner from Clemson since 1998. Ruck also went on to earn all-region status via an 11th-place finish. Ruck, a native of Greer, is a health science major.

Reen had a solid freshman season for the Tigers in cross country. The Orlando, FL product was the team’s second-best finisher with top-40 individual placements at both the ACC Championships and NCAA Southeast Regional. Reen is also a health science major.