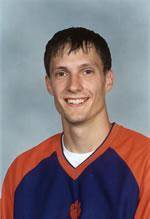 CLEMSON, SC – Clemson men’s track and field completed competition at the Clemson Classic held this weekend at Clemson’s Indoor Track and Field Facility. Sophomore Roy Cheney led the Tigers with a career-best time of 7.79 in the 60m hurdles to break the tape as the top collegiate competitor. His time places him in a tie for fourth place on Clemson’s all-time list in the event and provisionally qualifies him for the NCAA Championships.

The Clemson men’s track and field team returns to action next weekend at the Iowa State Last Chance Meet.