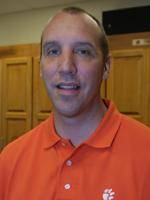 Clemson men’s basketball head coach Oliver Purnell has named Ron Jirsa as an assistant coach with the Tigers. Jirsa brings 22 years of college coaching experience to Clemson, including 15 years at the Division I level. Most recently, he has served as the senior assistant coach with Purnell at the University of Dayton since 1999. Since joining forces with Purnell, the Flyers posted an 88-39 record, with two NCAA appearances and two NIT appearances. In 2002-03, Dayton was 24-6 and won the Atlantic 10 Tournament, advanced to the NCAA Tournament as a #4 seed, and ranked in the final top 25 of both the USA Today and AP polls.

Jirsa has been a successful coach at every stop of his coaching career, and has earned the reputation of being a successful recruiter. He has been part of nine NCAA tournament teams, including his last four seasons as an assistant coach with Tubby Smith (two at Georgia, two at Tulsa). Three of those four teams advanced to the NCAA Sweet Sixteen.

After his graduation in 1981 from Gettysburg College, where he was basketball team captain, Jirsa began his coaching career as an assistant at Connecticut College in 1981. Two years later, he moved to the University of Delaware for one season. In 1984-85, he was the graduate assistant for the Virginia Commonwealth University team that finished #11 in the country.

He then moved on to the University of Tulsa for three seasons. After one season each at Belmont Abbey (1988-89) and Gardner-Webb (1990-91), he returned to Tulsa. Jirsa was an assistant basketball coach there on Tubby Smith’s staff for three seasons before being named associate head coach for the 1994-95 season. At Georgia, he was associate head coach for two seasons before being named head coach when Smith went to Kentucky in 1997. He was 35-30 in two seasons at Georgia, with two NIT appearances (1998, 1999). While at Georgia, he brought in two top-five recruiting classes.

Jirsa and his wife, Laura, have one daughter, Hannah.