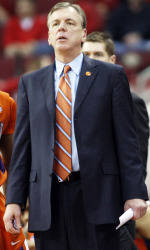 Interim Head Coach Ron Bradley will hold a brief press conference to be broadcast live on TigerCast beginning at 5:30 PM on Tuesday.

CLEMSON, SC – Ron Bradley has been named Clemson’s interim head coach for men’s basketball, as announced by Athletic Director Terry Don Phillips. Bradley takes over on an interim basis for Oliver Purnell, who was announced as DePaul’s head coach Tuesday afternoon at a news conference.

Bradley has been Clemson’s top assistant over the last seven seasons, all under Purnell. During that time, the Tigers have advanced to the postseason the last six seasons, including three consecutive NCAA Tournament berths over the last three years.

During Bradley’s time at Clemson, the Tiger program has compiled four consecutive 20-win seasons, a first in school history. Clemson has compiled an overall record of 138 wins against 88 losses, a 61 percent winning mark, since 2003 when Bradley joined the coaching staff.

He helped the Tigers to a school record-tying 25 wins and appearance in the NIT championship game in 2007. In 2008, Clemson advanced to the championship game of the ACC Tournament and earned the school’s first NCAA Tournament berth in 10 years. In 2009, he helped the school to its fifth straight season of improvement in terms of overall winning percentage. After that season, he was one of 10 assistant coaches to be named a “rising star” in the profession by Basketball Scoop.

Bradley helped implement Clemson’s pressure defense over the years. The Tigers have ranked among the top 15 teams in the NCAA each of the last six seasons in steals per game, peaking with a school-record 352 steals and No. 2 national ranking in the category in 2005-06.

Bradley has served as a head coach before. He spent five years as head coach at his alma mater, Eastern Nazarene (1976-81), and 11 years at Radford (1991-2002) when he succeeded Purnell. He compiled a 289-175 record at those institutions and led Radford to their first NCAA Tournament appearance in 1998.

Bradley is a native of Quincy, MA. He was a three-time NAIA honorable mention All-American at Eastern Nazarene and was inducted into the New England Basketball Hall of Fame last fall.