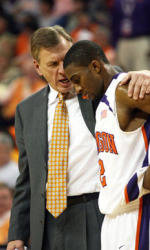 Ron Bradley a Semi-Finalist for Assistant Coach-of-the-Year by BasketballScoop.com

Clemson, SC – Associate Head Coach Ron Bradley has been named one of 20 semi-finalists for men’s basketball Assistant Coach-of-the-Year, as announced by BasketballScoop.com. The website, along with sponsor ONS Performance, will announce 10 finalists on April 20 and the winners on May 4. The five winners will be selected by a panel of coaches across the collegiate ranks.

Bradley is in his sixth season with the Tiger basketball program. He has helped Clemson to three consecutive 20-win seasons, a first in school history. This past season, Clemson finished 24th in the final Associated Press poll and compiled a 23-9 overall record. For the fifth straight season, the Tiger program improved its winning percentage.

Bradley, who owns over 30 years of collegiate coaching experience, helped the Tigers to a perfect 14-0 non-conference record in the regular season and a 9-7 mark in ACC play. It was the first time since 1965-66 and 1966-67 that the Tiger basketball program produced back-to-back winning records during the ACC regular season.