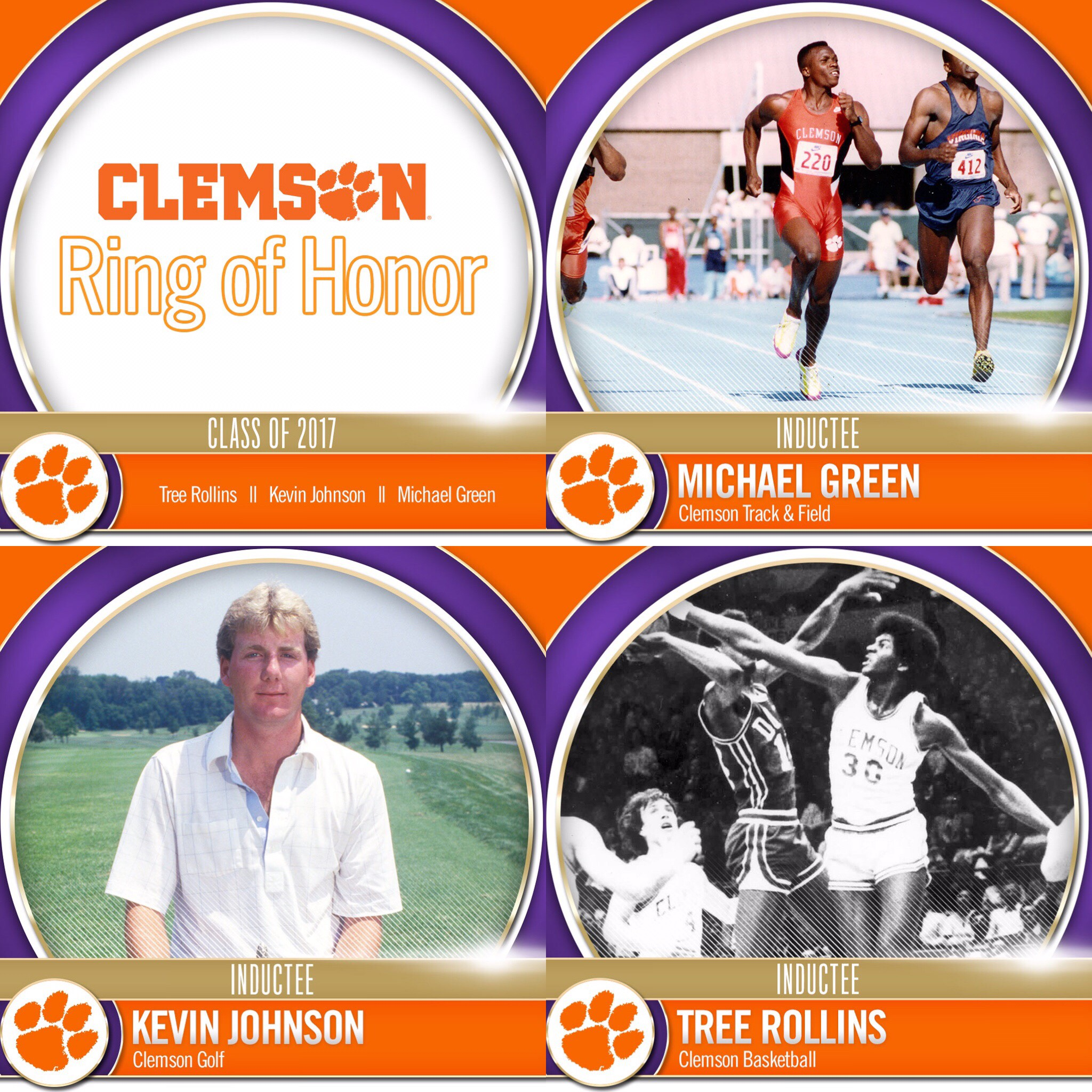 Rollins, Johnson and Green Ring of Honor Induction on Saturday

Clemson, S.C.–Former Clemson greats Tree Rollins, Kevin Johnson and Michael Green all will be inducted into the Clemson Ring of Honor on Saturday evening during ceremonies prior to the Clemson vs. Georgia Tech game in Memorial Stadium. It marks the first time since 1994 that there have been as many as three inductees into the Ring of Honor in the same year.

The Ring of Honor is the highest accolade a former Clemson athlete or coach can receive. An inductee must be a college graduate, be a member of the Clemson Athletic Hall of Fame and make a “significant contribution to the heritage of Clemson athletics.”

Rollins joins Dale Davis and Banks McFadden as the only members of the Clemson men’s basketball Ring of Honor, while Johnson joins Charles Warren and Jonathan Byrd as the third member of the men’s golf Ring of Honor. Green is the first Ring of Honor member in men’s track.

Rollins played basketball for the Tigers in the 1970s, Johnson played golf in the 1980s and Green competed with the men’s track team in the 1990s. All three were named to the ACC 50-Year Anniversary team in their respective sport and were named All-Americans.

Rollins was the star center of the Clemson basketball team from 1973-77. He was named an Associated Press All-American as a senior in 1977, just the second basketball All-American in Clemson history. The native of Cordele, Ga. averaged a double-double over his career and was a first round draft choice of the Atlanta Hawks in 1977. His No. 30 jersey was retired prior to his final home game n 1977, the first Clemson athlete in any sport to have his jersey retired. Rollins finished his degree requirements in May of 2016 through the Tiger Trust Program.

Johnson was Clemson’s first three-time All-American golfer. He was a third-team selection as a sophomore, a first-team selection as a junior and a second team choice as a senior.   His 27 career top 10 finishes still rank first in Clemson history 28 years after he played his last round for the Tigers. The 1988 ACC Champion won the 1987 United States Public Links Championship and was the runner-up the following year. He played for the United States Walker Cup team in 1989 and graduated from Clemson in December of that year. Clemson finished third in the nation his senior year in 1989.

Green was a three-time NCAA Champion sprinter during his Clemson career. He won the indoor 55 meters in 1992 and 1993. and the 100 meters outdoors in 1993. The eight-time All-American and nine-time ACC Champion was the ACC Indoor MVP in 1993 as a senior, and was a two-time Olympian for his native country Jamaica. He won the Frank Howard Award for bringing honor to Clemson in 1992 and was the IPTAY Athlete of the Year in 1993. He graduated from Clemson in 1996.