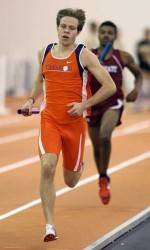 CLEMSON, SC – Brianna Rollins won the 60-meter hurdles in Fayetteville, AR at the Tyson Invitational to highlight three meets worth of action Saturday for the Clemson track & field program. The junior from Miami, FL had a time of eight seconds flat in the victory, while Spencer Adams was runner-up in the men’s high hurdles with a personal best. Clemson also had student-athletes competing at the Husky Classic in Seattle, WA and Tiger Paw Invitational at home.

Rollins defeated her top competitor, Jasmin Stowers of LSU, who finished runner-up but only with a time of 8.13. Rollins has now won the 60 hurdles at this year’s New Balance and Tyson meets, two prestigious indoor competitions. Keni Harrison finished sixth (8.41) in the women’s final. In the men’s final, Adams clocked a new PR, a time of 7.66, in finishing behind Illinois’ Andrew Riley.

Dezerea Bryant, a freshman from Milwaukee, WI, was fifth in the women’s 200-meter dash in Fayetteville. She clocked a time of 23.59, consistent with her earlier performances from this season.

Christy Gasparino won the women’s pole vault at the Tiger Paw Invitational. The sophomore out of Connecticut cleared a personal best by going over the bar at 13’1.75″/4.01m. Caroline Bond, a freshman, was runner-up with a season-best clearance of 12’6″/3.81m. Bond’s clearance moved her into seventh place in the Tiger record books for the event.

In Seattle, senior Alyssa Kulik placed 33rd in the invitational section of the women’s 3000 meters Saturday in the Husky Classic. She put herself sixth in the Clemson record books with a time of 9:35.67.

The Tigers take a week off before returning to the track at the ACC Indoor Championships from Feb. 23-25 in Boston, MA.