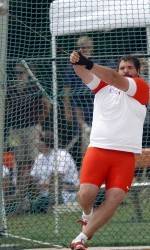 PHILADELPHIA – Clemson track & field concluded action from the 2010 Penn Relays on Saturday. A victorious effort in the open hammer throw by Alex Padgett and third place showing in the 110 hurdles championship by Charlton Rolle highlighted the Tigers’ efforts on the final day at Historic Franklin Field.

Rolle placed third in the championship final of the high hurdles. He posted a time of 14 seconds flat and edged South Carolina All-American Johnny Dutch at the finish line for his third place effort. Rolle had an outstanding weekend, as he helped the men’s shuttle hurdle relay team to victory in the championship of America on Friday.

Padgett won the collegiate section of the hammer throw. The red-shirt junior from Rock Hill, SC hit a mark of 193’11” to top the competition. Padgett is coming off an ACC championship weekend in which he placed fourth in both the shot put and hammer throw. He ranks second all-time in school history in the hammer throw behind teammate Zach Berg.

The women’s 4x200m relay team performed well in the championship of America final on Saturday, placing fifth. The team of Stormy Kendrick, Kristine Scott, Michaylin Golladay and Jasmine Edgerson – the same group that collected an ACC championship in the 400m relay last weekend – posted a time of 1:33.84 on Saturday. In other women’s relay action, the group of Brittany Pringley, Sonni Austin, Golladay and Kendrick finished fourth in the consolation final of the 4x400m relay (3:39.47).

The lone men’s relay in action on Saturday was the 4x800m team of Jasen Turnbull, Chris Slate, Will Noble and Ryan Mangone. The group finished in third place of the open section with a time of 7:29.74.