Roje Stona stepped into the cage for his third attempt during the men’s discus competition at the 2019 Outdoor ACC Championships knowing he had to get a distance marked. After fouling on his first two attempts in the qualifying round, he entered the ring while the eyes of eager spectators focused intently on Clemson’s captivating freshman.

In the ring, Stona readied his feet, coiled into his stance and unleashed the implement with absolute ferocity to catapult into first place, the same position he finished the competition. It was at that moment that a star was born.

Standing 6’6”, Stona is an imposing presence amongst his fellow students. A native of Montego Bay, Jamaica, he came to Clemson as a highly decorated athlete after representing his home country in numerous international competitions in the discus.

In his first season (2019), he contested the discus at eight meets, winning five and finishing runnerup twice. With his victory at the 2019 ACC Championships, he became the third Tiger to win the event and first since 1978.

Stona is ranked as the fifth-best Jamaican in the discus throw while being nearly four-and-a-half years younger than the next closest athlete ranked within the top five. The young athlete’s trophy case overflows with the spoils of victory, a direct result of winning 25 discus competitions over the past three years.

Following a stellar indoor season during the Tigers’ 2020 campaign, Stona’s sights were focused on the discus and emerging the victor at every competition he entered. However, once the spring season was canceled, those chances were lost.

“It was a disappointment for me just as it was for everyone else,” said Stona when reflecting on this past spring. 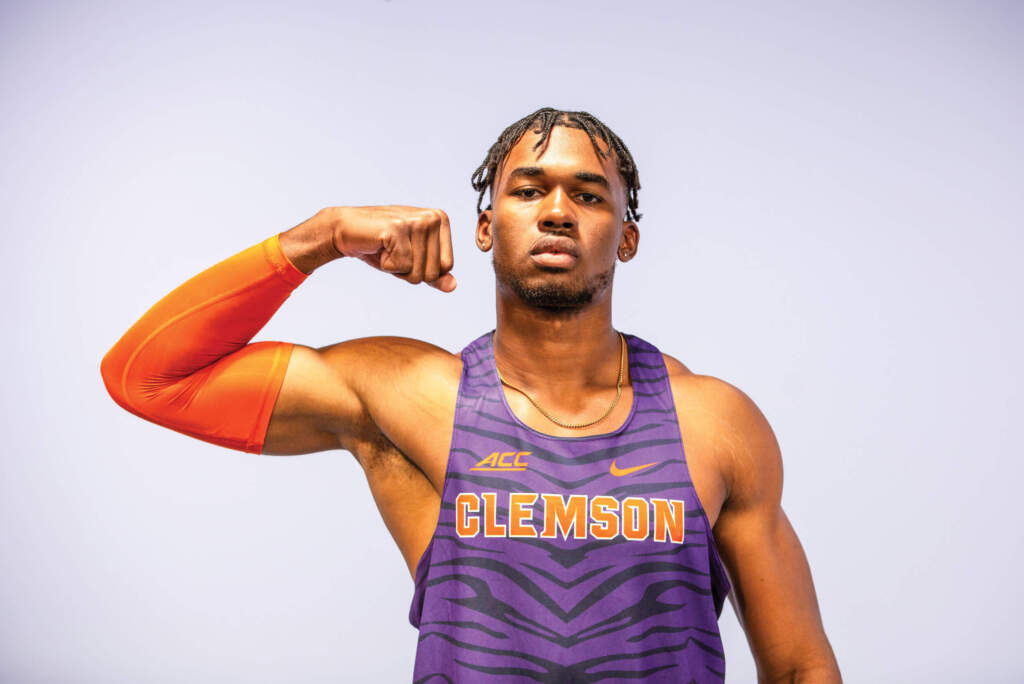 While every student readied their belongings to leave Clemson after the university shut down in-person classes, Stona was one of a few students who remained on campus. Stona spent a lot of time talking on the phone with his family to make sure they were safe during the trying times.

The decision to stay, and the accompanying restrictions, required him to train alone, something he recognized as being very difficult.

However, the opportunity to work and train in solitude highlighted one of Stona’s key traits…the determination to be the best.

“He is willing to sacrifice outside of track with nutrition, sleep and making smart choices about those he hangs out with during these times,” said Shawn Cobey, Clemson’s throws coach.

This determination is fueled by the prospects of being one of the best in the world.

Ever since Stona started competing in the under-16 age division, he has been one of the world’s best. This familiarity with the spotlight, according to Cobey, has prepared Stona for a successful career at the senior international level.

In a sport where experience is nearly as valuable as training, Stona has been relentless in seeking feedback of seasoned veterans and other members of Jamaica’s national team.

“He is gaining experiences through others without actually having them himself,” explained Cobey.

While Stona has to wait until the spring to showcase his talent and poise with the discus, all can be certain that just like at the 2019 ACC Outdoor Championships, Stona will deliver when it matters most.