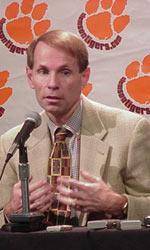 CLEMSON, S.C. (AP) – Bobby Robinson left Clemson the same way he’s accomplished so many tasks in 17 years of athletic director – by himself and without fanfare.

“My nickname for him is ‘Mr. Excitement,”‘ said Clemson senior women’s administrator Linda White, who has worked with Robinson the past 16 years.

Robinson, 56, said in February that he no longer had the fire to carry the Tigers’ athletic department – now a $27 million a year business – into its next era of growth. His tenure ends Sunday and former Oklahoma State AD Terry Don Phillips will begin July 1.

For someone in a high profile position, Robinson always favored the job’s quiet hallways and simple meetings. And it’s a style that has largely worked at the rural campus.

“He was never ego driven as some people can be,” said Atlantic Coast Commissioner John Swofford.

Robinson “didn’t always say much,” Maryland athletic director Debbie Yow said. “But when he did, it had a significant impact.”

White says she and colleagues had to disguise Robinson’s farewell party as a typical staff picnic at a baseball game. When Robinson showed up and realized he was the gathering’s focus, White said his reaction was “I’m out of here.” But White and the others made him stay.

But that did not mean Robinson shied away from difficult decisions or situations, associate athletic director Bill D’Andrea said.

Robinson held various roles at Clemson since arriving in 1970, including golf coach, business manager and associate AD. He was promoted to athletic director in 1985 and soon had to deal with one of the school’s stickiest messes – an NCAA investigation that led to the resignation of popular football coach Danny Ford in 1989.

“He studied the game, he studied people and was very, very accurate at meeting Clemson’s needs,” D’Andrea said.

Robinson’s focus has always been on the athletes succeed, his administrators and colleagues say. “At every meeting, on every question, he always said, ‘You know, the student athletes come first,”‘ White said.

That led to the creation of Vickery Hall, an academic center for Clemson’s athletes and others that Robinson shepherded every step of the way, said D’Andrea, director of student-athlete enrichment.

Off the field, Clemson athletes had a record 2.85 grade-point-average this spring.

On the field, though, is where Robinson might find some critics.

The three football coaches he’s hired since Ford national championship tenure – Ken Hatfield, Tommy West and Tommy Bowden – have combined for one ACC title and none since 1991.

The basketball team’s brief mid-90s success with Rick Barnes seems like it was decades ago with this current slide.

And cranes are everywhere on campus as the department, through $41.6 million in projects, tries to upgrade and improve facilities like Littlejohn Coliseum and Memorial Stadium that decayed or became outdated through years of debt-free ledgers under Robinson.

Robinson’s take? Hard to say since he has turned down requests for exit interviews. “Mr. Robinson’s been consistent that he just wants his accomplishments to speak for him,” says athletic spokesman Tim Bourret.

Sounds just like the perfect way for Mr. Excitement to depart.