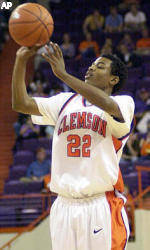 It also marks the third straight year Clemson has had two representatives on the team.

Robinson averaged 10.8 points per game as a junior and shot 40.4 percent from three-point range. He was named second-team All-ACC Tournament following a 41-point performance versus Maryland and North Carolina. Robinson posted a 3.07 GPA last spring and has a cumulative 3.23 GPA in elementary education. He is on track to graduate next spring.

Hammonds was named to the ACC’s All-Freshman Team after averaging 10.6 points per game in his first season as a Tiger. The Cairo, GA native ended the 2004-05 season with a career-high 26 points in the NIT versus Texas A&M. An architecture major, Hammonds sports a cumulative 2.97 GPA.