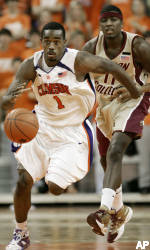 Clemson forward K.C. Rivers has been named a second-team All-District selection by the National Association of Basketball Coaches. Rivers was one of eight ACC players on the two teams chosen for District 5. It also marks the second straight year Clemson has had a player ranked among the top 10 in District 5. Last year, James Mays was a second-team selection.

Rivers, a junior from Charlotte, NC, is the top scorer on Clemson’s 21-7 team that is third in the ACC standings with a 9-5 record. Rivers has averaged 15.1 points per game so far this year, best on the Clemson team. He is also third in rebounds with 6.6 per game.

Rivers ranks in the top 15 in the ACC in a number of categories. He is currently 11th in scoring, eighth in field goal percentage, 11th in rebounding, fifth in offensive rebounds, ninth in steals, and fourth in three-point goals per game. Rivers has made 46.3 percent of his three-point shots in ACC games, best in the league. A model of consistency, Rivers has scored in double figures in 24 of the 28 games, more than any other Tiger, and has led Clemson in scoring 12 times, more than any other Tiger.