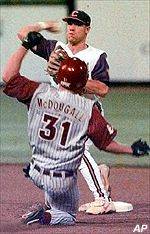 Riley, a senior second baseman earns ACC Player of the Week honors after leading Clemson in a three-game series versus Oregon State and a two-game series at UNLV. For the week, the Seattle, WA, native notched 11 hits, nine RBIs and a .524 batting average. He finished the five-game stretch with 21 at bats as well as contributing seven runs, three doubles and two home runs. Riley had at least one hit in all five contests and went 3 for 4 on two occasions and missed hitting for the cycle in the finale vs. Oregon State by a triple. He had a single, a double and an inside-the-park home run.

Pitcher of the Week honors are claimed by Duke right-hander Kevin Thompson. The junior, who hails from Evans, WV, threw eight innings allowing no runs, just three hits and two walks as the Blue Devils downed the Cincinnati Bearcats 4-1. Thompson captured the win, facing 28 batters and striking out eight.