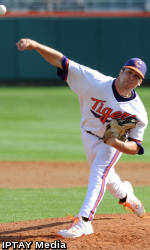 Clemson righthanders Kevin Brady (Gaithersburg, MD) and Matt Campbell (Alpharetta, GA) both suffered injuries in the Tigers’ 6-5 loss in 13 innings at Georgia Tech on April 27. Brady, a junior, suffered a hamstring strain while covering first base in the sixth inning, while Campbell, a sophomore, suffered a Latissimus Dorsi (“Lat”) strain in the ninth inning. Brady will be out of action for at least 2-4 weeks, while Campbell will be out of action indefinitely.