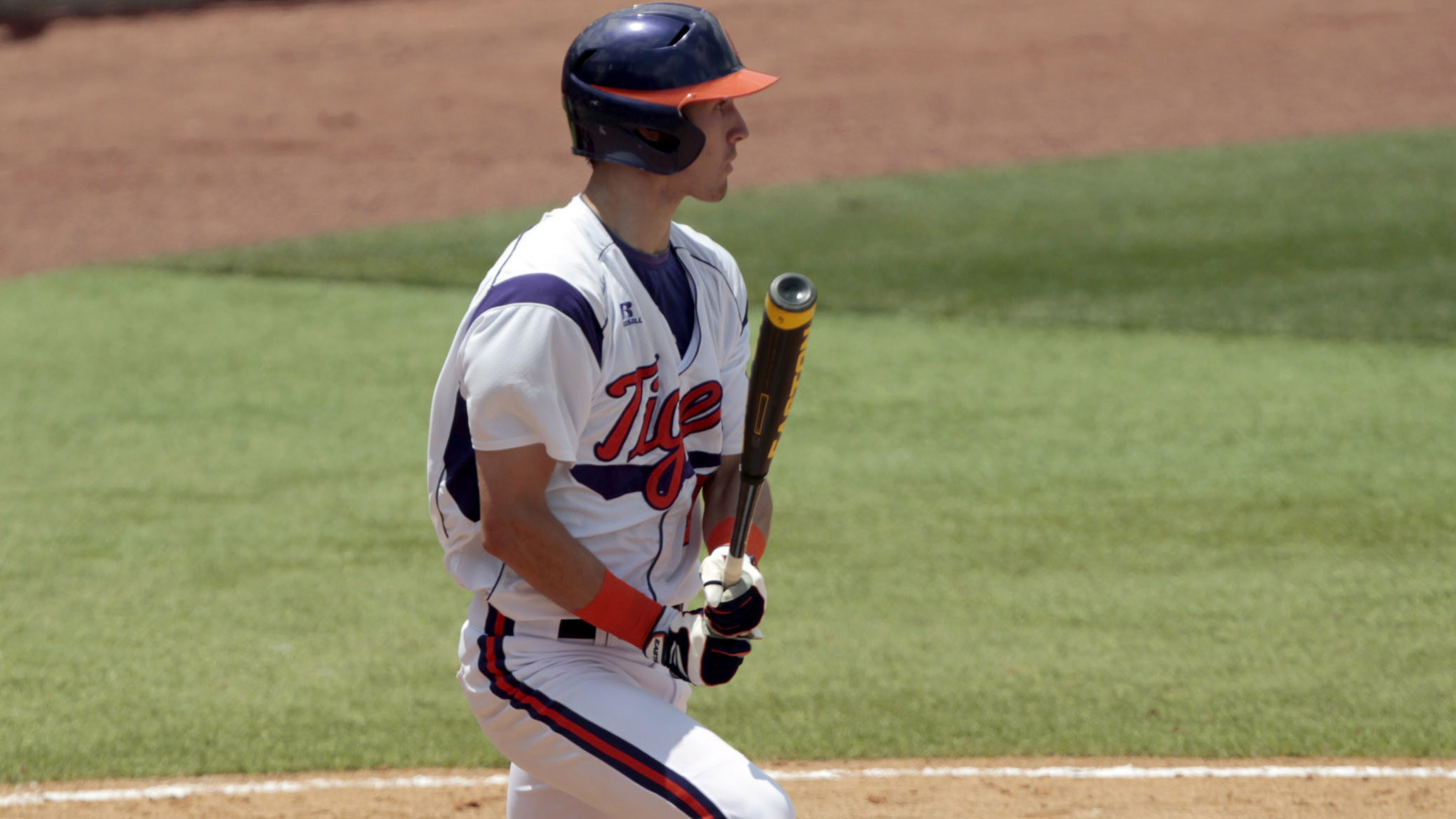 Junior righthander Josh Richardson pitched a complete-game six-hitter and senior catcher Trey Wimmer hit a homer with a career-high six RBIs to lead Liberty to an 8-3 win over #17 Clemson in the Columbia Regional in front of 5,604 fans at Carolina Stadium on Friday afternoon.  The Flames, who moved into the winners’ bracket with the win, improved to 35-27 on the season.  The Tigers, who fell into the losers’ bracket, dropped to 39-21 in 2013.

The Flames took a 3-1 lead with two runs in the third inning and never relinquished their lead.  Wimmer, a native of Greenwood, SC, hit a three-run homer in the sixth inning to put the game out of reach against the Tigers, who saw their eight-game winning streak in NCAA Regional openers come to an end.  It was the first time since 2003 that Clemson lost its first game of an NCAA Regional.

Richardson (4-4) pitched 9.0 innings to earn the win.  He allowed just six hits, three runs (two earned), and no walks with one strikeout in throwing 104 pitches.

The Flames took the game’s first lead in the top of the first inning.  Ashton Perritt led off with a ground-rule double to left-center on a 1-2 pitch, moved to third on Ryan Cordell’s groundout to second, and scored on Wimmer’s sacrifice fly to center.

In the bottom of the first inning, Thomas Brittle reached as the leadoff batter on a fielding error by second-baseman Bryan Aanderud.  Steve Wilkerson‘s single to center advanced Brittle to third, then Steven Duggar laced a single to right field to score Brittle.

Jake Kimble led off the top of the third inning with a single to right field and Perritt reached on an error after his bunt.  Cordell’s sacrifice bunt moved the runners up a base, then Wimmer lined a double to right-center to score Kimble and Perritt.

Brittle led off the bottom of the third inning with a single to right field and advanced to second base on Wilkerson’s groundout to first.  Duggar followed with a line-drive single to center to score Brittle.

Alex Close led off the fourth inning with a line-drive home run to left field, his third long ball of the season.

Kimble led off the sixth inning with an infield single on an 0-2 pitch and advanced to second on Perritt’s sacrifice bunt.  Cordell walked after being down in the count 0-2, then Wimmer blasted a three-run homer down the left-field line, his fifth long ball of the season, to give Liberty a 7-2 lead.

In the eighth inning, Perritt lined a one-out single to right-center, stole second, and scored on Cordell’s double over the third-base bag.

Duggar led off the ninth inning with a double to right-center, breaking Richardson’s streak of 17 batters retired in a row.  Two batters later, Shane Kennedy laced a single to right-center to score Duggar.  But Tyler Krieger grounded into a double play to end the game.

Wimmer had two hits and six of Liberty’s eight RBIs to lead its 13-hit attack.  Kimble totaled a career-high three hits and two runs, while Perritt went 2-for-3 with three runs.  Justin Sizemore and Close added two hits as well.  Liberty put its leadoff batter on base in six of the first seven innings and had at least one hit in all nine innings.

Duggar went 3-for-4 with a double and two RBIs to pace the Tigers, who had six hits in the contest.  Brittle scored a team-high two runs as well.

Clemson will play the loser of Friday night’s game between Saint Louis and South Carolina on Saturday at 2:00 PM PM.  The game will be televised by ESPNU and will be available on ESPN3.