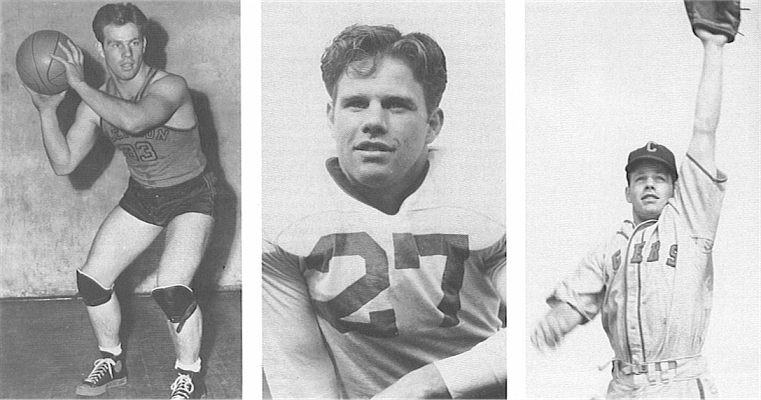 It was with sadness that we heard that Dr. Frank Gillespie, one of the greatest all-around athletes in Clemson history, died recently. The 1949 Clemson graduate was 94 years old.

Gillespie was the model student-athlete during his career at Clemson. He was an excellent student, double majoring in electrical engineering and textile engineering. As if that wasn’t enough, he was a starter on three Tiger teams, football, basketball, and baseball. He was also the student body President.

Gillespie entered Clemson in the fall of 1942. But on a visit to Clemson before he enrolled, is what was so interesting.

Clemson Head Football Coach Frank Howard remembered the visit very well. Gillespie along with Jack Pollack, was attending the Blue Ridge School for Boys at Hendersonville, NC. Pollack asked Gillespie to go on the trip to Clemson with him. Pollack said he was going to a football tryout at Clemson.

Pollack was in the middle of the tryouts when Howard asked Gillespie “aren’t you going to suit up and try out?” Gillespie said no at first. Eventually he put on the football pads and a uniform.

“I told Frank, come on over and I’ll give you a tryout, said Howard.”

“When I was younger, I’d put on the pads and work out with the players some,” explained Howard.

“I remember very well giving Frank Gillespie a tryout, which was legal in those days. I hadn’t heard much about him, he was originally from Beckley, West Virginia. I lined up in front of him and told him to charge into me. Whomp! Bam!

“Coach, I thought we were going to work out,” he told me.

“We have, welcome to Clemson. I signed Gillespie on the spot.”

“He went on to be one of the finest we’ve ever had. He was a great leader and athlete and could do pretty much whatever he wanted,” said Howard.

During his freshman year he played football, basketball and baseball. As a freshman he was the starting first baseman and batted .311.

Like so many during that era, he left school and served in World War II. Gillespie served in the United States Army during World War II in Patton’s Third Army and won three decorations for bravery during the Battle of the Bulge.

Gillespie came back to Clemson for the 1946-47 academic year. In an earlier interview, Gillespie remembers that time at Clemson.

“When I came back to Clemson after missing time for the war, I noticed my throwing arm was not as good,” said Gillespie. “But other than that I was still the same in other activities. The professors were willing to help and work with you. I had two good friends I studied with and this helped me a great deal. I didn’t have much time for socializing.

“I didn’t notice much difference at Clemson before and after the war. Coach Howard did not change either, he was still the same great coach,” said Gillespie.

After the war, he was a starting guard on the Tiger football team for three years, playing both ways on the offensive and defensive lines. He was also a starting guard in basketball for three years, and played three more years of baseball, where he made the All-State team as a senior. He was the captain of the baseball and basketball teams and was a game captain on the football squad.

During his Clemson career, many honors came his way.

Gillespie won the McKelvin Award as the top all-around athlete in the Southern Conference for the 1947-48 academic year, his junior season.

Gillespie was the last Clemson athlete to letter in the three major sports of football, basketball, and baseball.

Long-time Greenville News Sports Editor and Columnist, Carter “Scoop” Latimer probably described Gillespie the best in his comments in a column he wrote in 1947. “Frank Gillespie, Clemson guard, is strictly a big league football player. He is as tough as the iron that comes from around his West Virginia, mountain home.”

Gillespie double-majored in electrical engineering and textile engineering and served as president of his senior class. An honor student, he was inducted into the Clemson Athletic Hall of Fame in 1977. In 1996, he was named to Clemson’s All-Centennial Team.

He was the Senior Council President, named to the Who’s Who Among Students in American University and Colleges. Gillespie was a member of the prestigious Tiger Brotherhood honorary fraternity, Blue Key, and the Block C Club.

Gillespie had a lot of fond memories at Clemson and playing on the undefeated 1948 team his senior season was one of them. Gillespie was a guard on the team and teammate Tom Salisbury was a tackle. Both of these players eventually became Baptist Pastors. “Who would have ever thought that there would be two Baptist Pastors playing side by side,” Gillespie once remarked.

Later, after returning to IBM, he earned his Doctorate at Luther Rice Seminary.