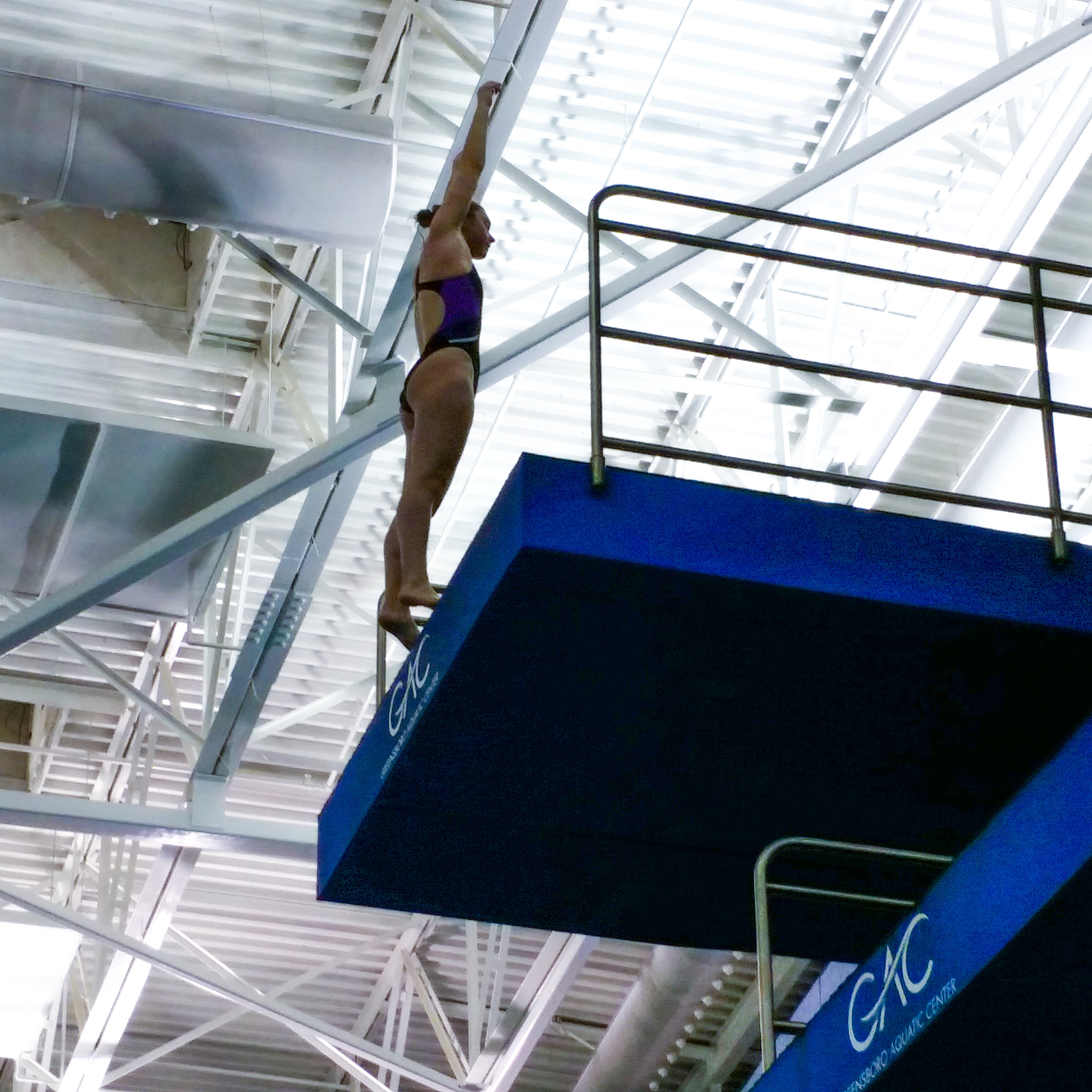 Click picture below for an exclusive Visual Recap of the 2016 ACC Swimming and Diving Championships and/or read story below:

GREENSBORO, N.C. – The Clemson diving team concluded competition at the 2016 ACC Swimming & Diving Championships on Saturday, totaling 86 points and finishing seventh in the conference in the diving category. The three-day competition, held Feb. 17-20 at the Greensboro Aquatic Center, saw the Tigers record a program-best finish as a team, as well as by an individual.

The seventh-place finish was Clemson’s best finish at the conference championship meet since 2012, when the program became a women’s diving program. Sophomore Danielle Reitsma advanced to the finals of the platform competition, placing sixth overall, becoming the Tigers’ first finalist in any event at the ACC championship meet.

“Our ladies stayed hungry and humble throughout the competition,” said Head Coach Leslie Hasselbach Adams. “They supported each other and were a strong presence, representing Clemson with pride. Our team pulled together to produce our highest team finish yet, and I am very proud of them.”

In the one-meter competition on Wednesday, Clemson had a strong showing, placing three divers in the top-25 in a field of 45 divers. Sophomore Danielle Reitsma was the Tigers’ top finisher, earning 12th place after scoring 280.80 points. Freshman Caylin Hirapara and junior Sarah Braun rounded out the top-25 finishers for Clemson with scores of 274.10 and 252.75, earning finishes of 16th and 23rd, respectively. Braun, Hirapara and Reitsma combined to earn 28 team points for Clemson, putting it in seventh place after the first day of competition.

As a team, the Tigers tallied seven individual dive scores over 50 points and 36 dives over 40 points in the one-meter event. Individually, Hirapara’s 274.10 was a season-best score for her in the event, while her score, as well as Reitsma’s, were also NCAA Zone-qualifying marks.

After observing a day off for training on Thursday, the team was back in competitive waters on Friday to partake in the three-meter preliminary competition. Braun, again, placed well for the Tigers and was the team’s top finisher in the event, scoring 286.45 points for 19th place. Senior Megan Helwagen earned a 21st-place finish after scoring a 283.05, as she and Braun both earned team points for Clemson in the event.

In the three-meter, Clemson had 14 dives over 50 points and 24 dives over 40 points. Braun and Helwagen earned a total of 10 team points, receiving six and four points, respectively, for their finishes. Braun’s 286.45 was also a NCAA Zone-qualifying score. Sophomore Allison Brophy recorded a career-best score of 259.60 in the three-meter competition.

On the third and final day of competition on Saturday, Reitsma shined for Clemson in the platform event. In the preliminary round, she scored 251.70 points to earn seventh place and solidify a spot in the finals by placing in the top eight. Even after a balk on her last dive of the preliminary round resulted in a 20-point deduction on the score of her final dive, Reitsma was able to dive her way into Clemson history. She became the program’s first diver to ever earn a berth in the finals in any event at the ACC Championship meet.

Reitsma represented Clemson well and with pure class in the finals. Finishing sixth with 248.75 points, the native of Calgary, Alberta, Canada was all smiles, after placing amongst the top platform divers in the ACC.

“Danielle had an outstanding platform competition and in return, had a historic day for our program,” said Assistant Coach Kevin Lawrence. “It was fun to see her put it all together and perform in front of hundreds of people. She loves the crowd; the more cheering the better for her. She is right where she needs to be for our upcoming NCAA Zone Championship meet.”

Reitsma led all Tiger divers, recording 39 points for the team, while Helwagen earned 17 points and Braun and Hirapara each earned 15, accounting for Clemson’s 86 team points. The total points earned at this year’s championship meet bested the team’s 2015 competition point total by 50.

“Our program continues to move forward due to our strong foundation of character and culture,” said Hasselbach Adams. “I am thankful for a supportive staff that embraces our values and helps to drive them home with our team. Our season is not finished yet, as the best is yet to come. Now we’re on to the next stop in our season journey, NCAA Zone B Championships.”