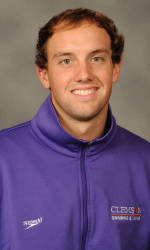 SPARTANBURG, SC – Clemson graduate Chris Reinke qualified for the United States Olympic Trials in a pair of sprint freestyle events over the weekend.

“It has been a pleasure working with Chris,” Clemson Head Coach Christopher Ip said. “In swimming, for most athletes, reaching the NCAA meet and Olympic Trials are the apexes of our sport. Being able to work with student-athletes that can attain success in both venues is rewarding.”

Reinke earned honorable mention All-American honors in the 200 freestyle relay in 2011 and has been named to both the All-ACC and Academic All-ACC teams throughout his career. He was also honored as a CSCAA Scholar All-American in 2011.

Reinke recently graduated from Clemson University with a 3.66 cumulative grade point average in the Civil Engineering program. He has already accepted a position with PCL Industrial Construction in Alpharetta, Ga.